Your last reply got me thinking so I read through your owners manual and see that you have the shift selector option B. Basically the automatic with selectable manual mode PRND-M+/- vs the other option of PRND32-1 with an overdrive button on the shifter handle. I also saw in your manual where it does call out that the transmission may still automatically up-shift if traveling too fast in a given manually selected gear but I don't believe you'll encounter that issue when in 4th. I dug through the towing guides and no where that was Nissan specific could I find anything about staying out of 5th gear. But there is plenty of information on it out on the web.

I re-read the thread and after going through the owners manuals and towing guides I'm still confident your transmission was, if not hunting definitely running in 5th but out of OD lockup generating a lot of heat and putting you in limp mode as previously mentioned by another poster. We'll have to wait until next year for you to run a test at the expense of fuel mileage.

I did a lot of towing with a loaded 6000 lb trailer last summer with 30+ C weather and don't have the issue that you have. I can go whatever speed, although I don't go over 100 km/h with that load. You pathy is definitely very capable of towing. Tire size shouldn't matter. I use oversize 20" wheels/tires in the summer, so that should not be an issue either. Honestly, I don't think it's a tranny problem. I would make sure that my engine has full compression and rins like a champ. I switched my pathy to a dual exhaust setup and i can accelerate with a full trailer, just like any car around me (except probably costing $2/meter travelled

UPDATE:
We made the same trip out to Cypress Hills this past week, and without incident. I have learned a lot about towing, and have adjusted my expectations for the R51. I will try to share my experience in as few words as possible

I installed a Bully Dog GT in order to monitor the trans temp (my $400 thermometer). I used the Premium gas program (the only options are Regular or Premium…? I thought there would be a towing program?) The trans temperature stayed around 145°F on the highway with the trailer, and only increased when we stopped for gas, but would drop again after a few minutes of driving. The engine coolant temp stayed around 195°F.

I took Blink32 ‘s advice and kept the shifter in M4 while on the highway, and would shift down to 3rd for some of the inclines. I should have mentioned that this trip has a few hills, we gain about 2,264’ of altitude, starting at 1,876’ and arriving at 4,140’. In 4th gear we were able to cruise along at 90km/h (55mph) comfortably, and would sometimes creep up to 100-105km/h in a slipstream. During the last 50km, around the time that my ears popped, we had to slow to about 70-80km/h (44-50mph) – I attribute this to the altitude, inclines and the wind. When we turned south we had a side wind coming from the east, and it made a big difference to performance. The trans temp went up to 195° as I had to drop down to 2nd and 3rd gear on the last couple of hills, but the temp dropped again when we levelled out. The wind was behind us for the first 350km.

PAYLOAD! I did not know about this until recently, but the weight of your trailer is only one factor in towing performance. The R51 has a relatively low payload limit. This is the amount of weight that can be loaded on the vehicle, including people, cargo, hitch weight, etc. The GVWR is 6,113, and the listed curb weight is 4,795, which would allow for 1,318lbs payload. I weighed my Pathy empty, and it was 4,982 with a full tank of gas, leaving 1,131lbs for payload. With 2 adults, 2 teenagers, 2 bikes on the roof, one boston terrier, snacks, pillows, solar panel and my emergency tools, I thought we would be under. We stopped at the scale and came in at 6,151lbs… I had not accounted for the WD hitch and bars which probably add 100lbs! Even at this weight we ran a lot better than previous trips, which included full coolers and a Weber Q in the trunk – probably closer to 1,500lbs.

Tires: I don’t know wtf is up with my TPMS; I set the cold PSI to 35 and largely ignored the TPMS light when it came on. The readings were at ***, 38, 40, 40. The General Grabbers can handle 65psi max, so I wasn’t worried. These tires are ten years old; I'll be replacing them with 285/75/R16 Duratracs in the spring so we'll see if the TPMS still acts up then.

I also kept the R51 in 2WD while towing this time; it was in Auto mode last time. I don’t know if that makes any difference.

In short, my towing issues were more about my own ignorance than the R51. I had been trying to drive too fast with too much payload. She performed as expected, considering the load she was under. My advice to anyone looking to tow with their Pathy?
1. PAYLOAD, PAYLOAD, PAYLOAD!
2. Turn off Overdrive or shift into M4
3. Don’t rush, the Pathy’s a comfortable ride, bring some coffee and enjoy the journey 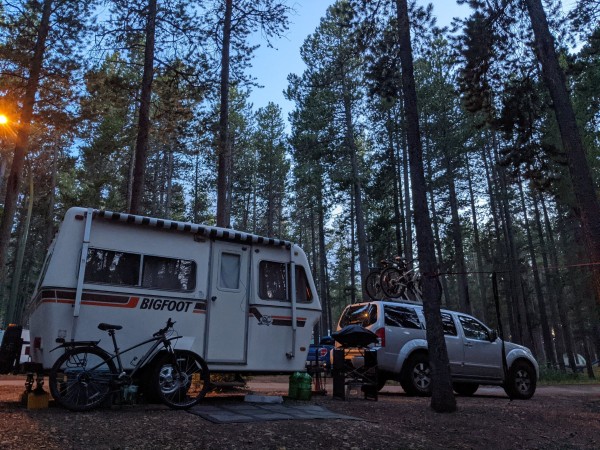 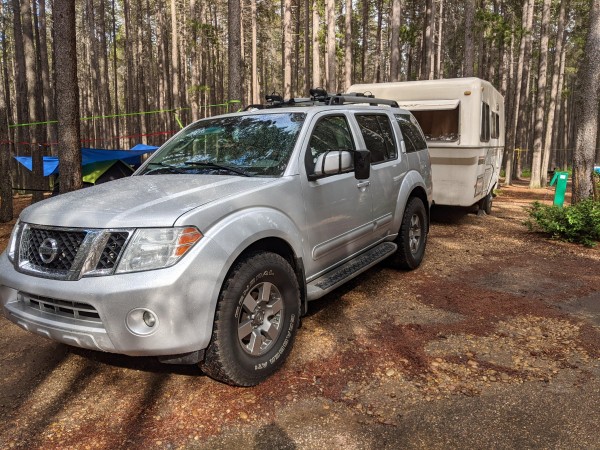 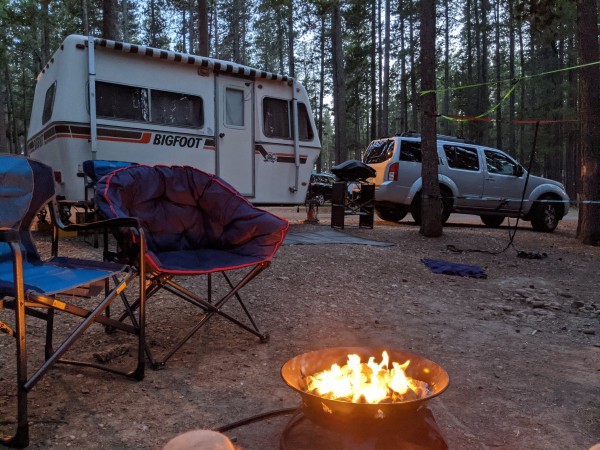 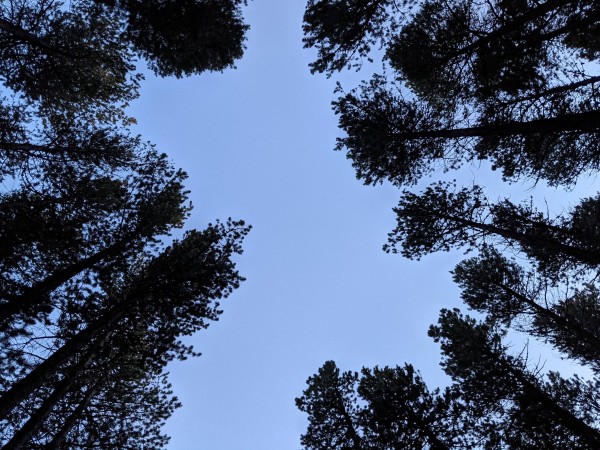 I think your TPMS system has a failing TPMS sensor; most likely, the battery is weak. The TPMS system will turn on the warning light when tire pressures get too low, usually around 26 or 27 PSI. High pressures will not affect the system. It's always best to set your tire pressures when they are cold; 35 PSI is the cold pressure spec on an R51. When tires are driven, the air inside of them gets heated and expands, causing the tire pressure to increase, up to 4 or 5 PSI. So, checking your tire pressures hot and seeing 38 or 39 PSI would be normal and the tires need not be "aired down."
You could check for TPMS codes, which would likely point to an indication of your problem. There are a lot of YouTube vids on how to do it without special tools. If you look under the drivers side of the dash, on the same harness as the OBD II diagnostic connector, there is a white, 2-pin connector with a single wire, often taped in place with blue electrical tape. This is the TPMS diagnostic connector. If you ground the wire and turn the key on, the TPMS warning light will flash 2-digit trouble codes, which you can find in the factory service manual (use the service manuals tab at the top of the page to find one for your vehicle). Most likely you'll find a weak battery code or communication error code for one of the sensors. NOTE: the TPMS controller will display codes corresponding to the bad TPMS sensor at the position to which that specific sensor was registered, but may not necessarily be currently located. Every time the tires are rotated, the TPMS sensors are supposed to be ID registered, again, which often doesn't happen. To give an example, let's say you ID registered your TPMS sensors to the controller. A week later, the right-rear (RR) tire pressure goes low; the TPMS controller will set the warning light and a trouble code for the RR wheel....as is supposed to happen. You fix the tire leak and drive-on. A few months later, you rotate the tires, front to rear, but fail to ID register the TPMS sensors. A couple of days later, you pick up a nail in the left-front (LF) and the tire pressure gets too low; the warning light comes on and the controller triggers a code. However, since the sensors weren't registered the last time the tires were rotated, it will trigger a code for the left-rear wheel, instead of the LF, because the last time the sensors were registered, the TPMS sensor that was in the LF sensor is now at the LR position, and the tire that is currently in the LF position that picked up the nail has the sensor that was last registered in the LR position.
What I would do is get a TPMS trigger tool: 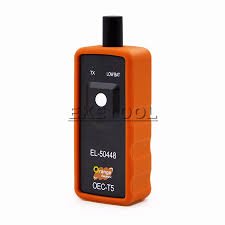 You can get one for under $20 online and makes ID registering your tires relatively easy, even without a scan tool. It can also help you find a bad sensor. To ID register your TPMS sensors, Turn the key on and pulse ground the TPMS diagnostic connector 6X within 10-seconds. The TPMS warning light will start flashing if register mode is activated. Go to the LF wheel, put the trigger tool next to the tire near the valve stem and press the button on the tool. Within a few seconds, the exterior lights will flash when the sensor has been registered. Continue, in order, to the RF, RR and LF wheels. If the lights flashed after each wheel attempt, the sensors are registered and you can turn off the key. If the lights don't flash at a particular wheel, it may be that the TPMS sensor is faulty. You can attempt the procedure at the next wheel and if that one registers, then that's your sign the previous sensor is faulty. The procedure won't complete until you replace the bad sensor. TPMS.com is a good place to shop for replacement, OE sensors. If you are going to be getting a new set of tires in the near future, I would replace all 4 sensors and save yourself some future headache. TPMS sensors usually last around 4-7 years, give or take.
Top

Some great info in here.

I think I may just buy one of those TPMS Tool thingies for when I flip to my winters.
What I've done in the past is the following:
Set tires as follows:

Drive a short distance and TPMS Light on dash should go out if all tires have registered correctly.
Then Restore your tires to your desired PSI.

I've done this a few times now and it seems to work but, that TPMS tool mentioned in here looks like it would resolve the having to drive for a bit part.
Top
Post Reply
21 posts