More of a placeholder than anything else. I was able to snag some tentative vacation "hold" dates for April 5-11th. Basically the week after Easter. Once again, I don't know if I'll be down there for a week or only 4 days, etc.

The big question is how many of you would be interested in hooking up for a day or more of Pathfindering during those dates? Carl, Jim, Rodel? If so, which dates work best for you?

Looks like I'll be driving down on Saturday, April 3rd, returning to Salt Lake the following Saturday, April 10th. Even managed to get the girlfriend to come along, so Jim better show up so they can talk shop. I realize those dates probably suck for most of you, especially since they include too many weekdays. If anyone thinks they can make it down during those dates, let me know.

Sorry for the ridiculously late notice. Work has been beyond hell. I've been borderline "F you, I quit" for a number of months now. Talk about the worst time ever to be looking for a new job.
Top

Kids and I will be running all over CA for spring break week this year. Part of the plan is a one day drive through DV, probably Titus Canyon, Race Track, Eureka Dunes and then out the north end of the park. I'd love to meet up with people but we're kinda constrained on what we're doing so no idea if it'll mesh with other people's schedules.
Top

No problem, Carl. You'll be out and about on what sounds like a good time, and that's all that matters. One of these days I'm sure we'll be able to round up a few of the guys for something, maybe not DV related, but something.
Top

I had a good time in Death Valley this year. Bummer that none of you could make it, but it is what it is. I spent the first couple of days with about 14 other people, some of whom were little ones. This is probably only the 4th time in my life that I went to the Furnace Creek Inn for their annual Easter egg hunt, but it still proved to be amusing. Since a lot of us have posted so many pictures from here in the past, I'll only post a few & hopefully they'll be different.

This was at the Inn on Easter. The girl in the bunny suit is apparently quite the slut from what I heard from numerous people there: 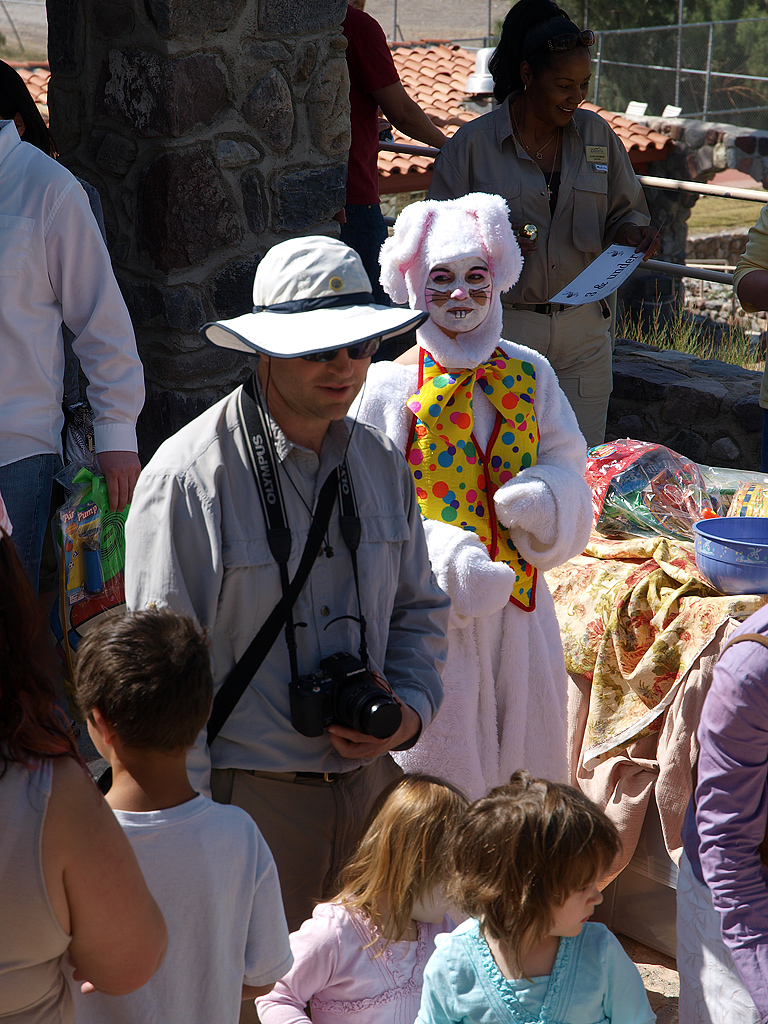 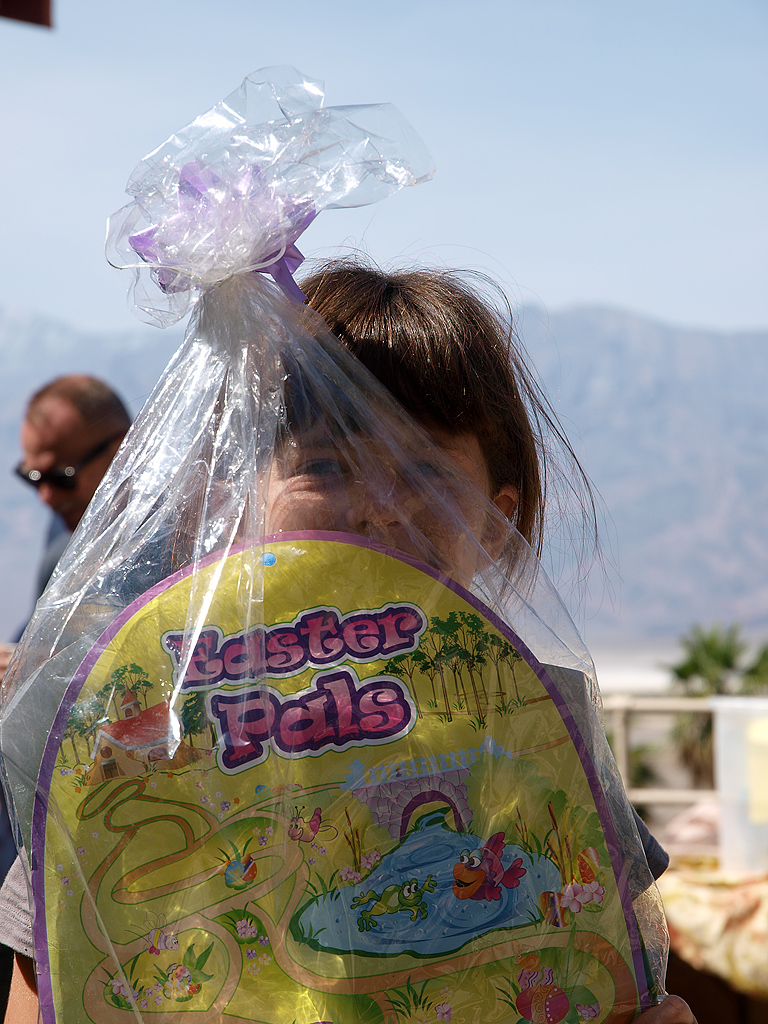 I've told people over the years that they have never truly experienced the concept of wind until they encounter it in Death Valley. So many times in the past, I'd sit there and watch as fully loaded dome tents went rolling off into the desert. We had 1 day of really good wind, so I wandered the campground to see how many tents were left. Not many. About the only ones that survived were the ones with super beefy stakes and a few hundred pounds of weight inside, although they would still be bent flat. Here's one sample of what I mean: 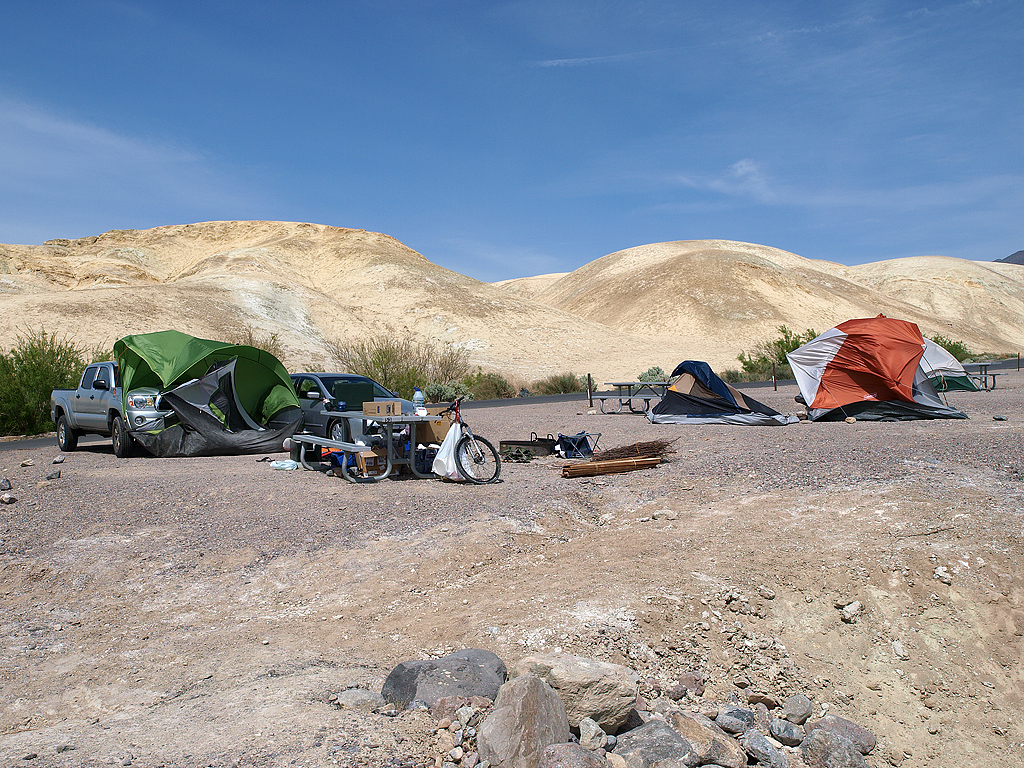 I had 12 serious stakes holding down my tent, so I had no problems. But, I had to pull out the rock pick to dig out the stakes on the last day because I just couldn't get them out. One of them busted in my hand and made a 1" gash in one of my fingers. Pretty sure I would have needed stitches, but super glue and 5 bandaids did the trick.

4 of the 6 days I was there were spent exploring. One of the days we drove out to Rhyolite & then did Titus Canyon. On the way to Rhyolite, it was hailing on us & very cold (the only day of cool weather). 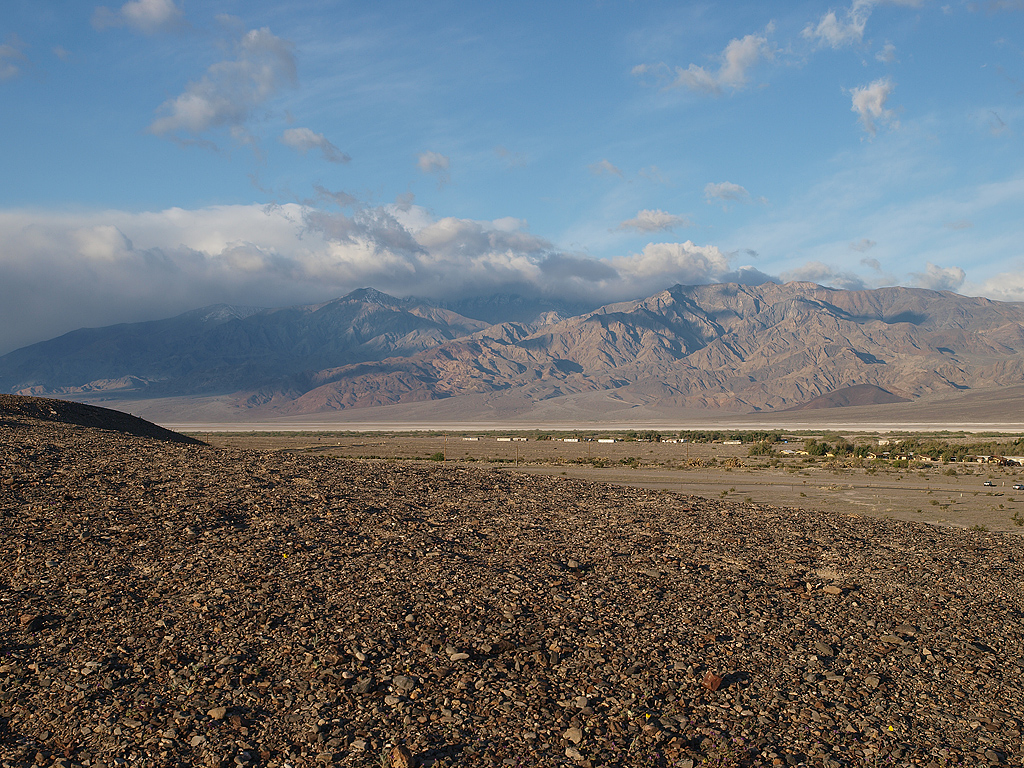 And a few from Rhyolite: 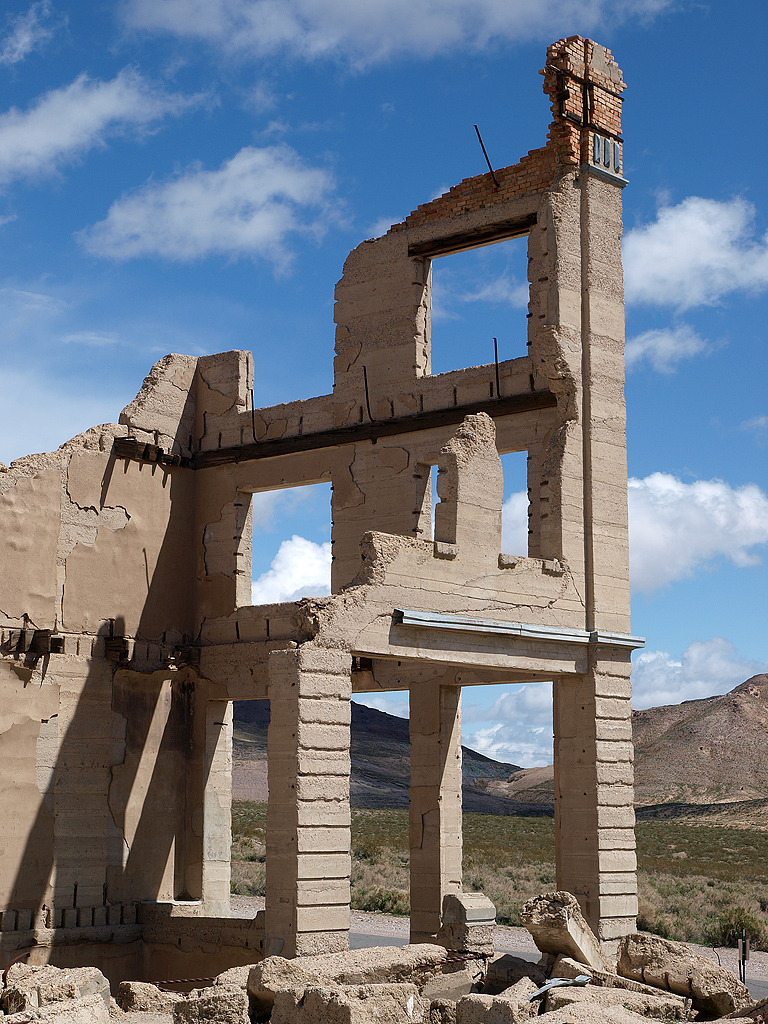 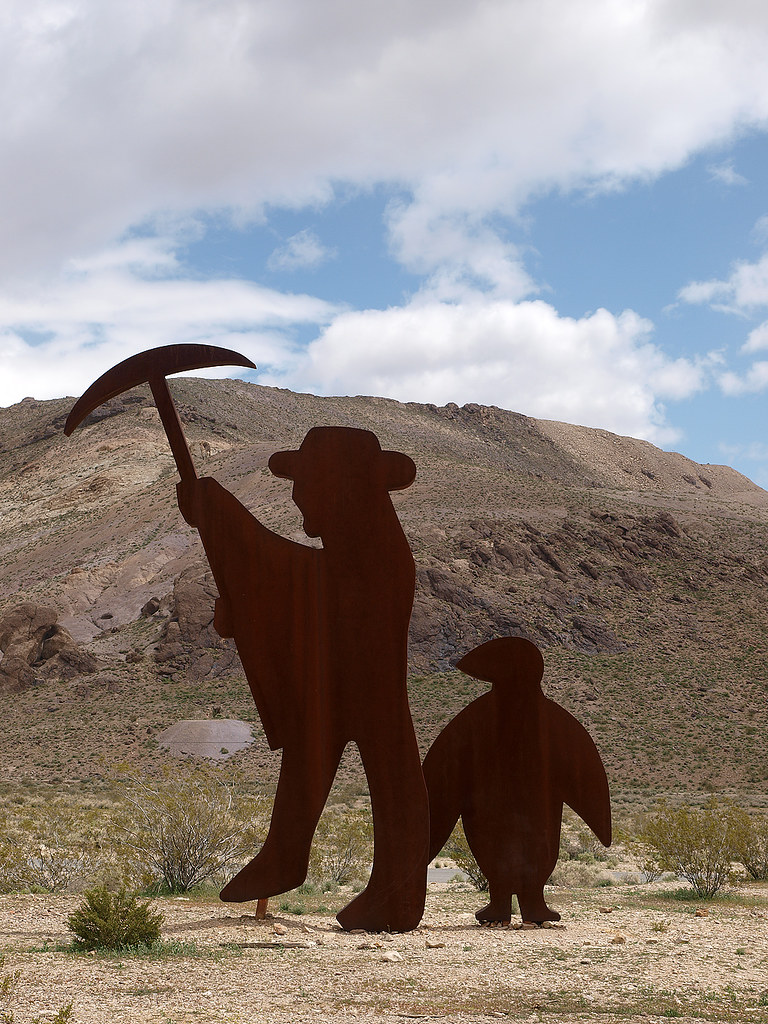 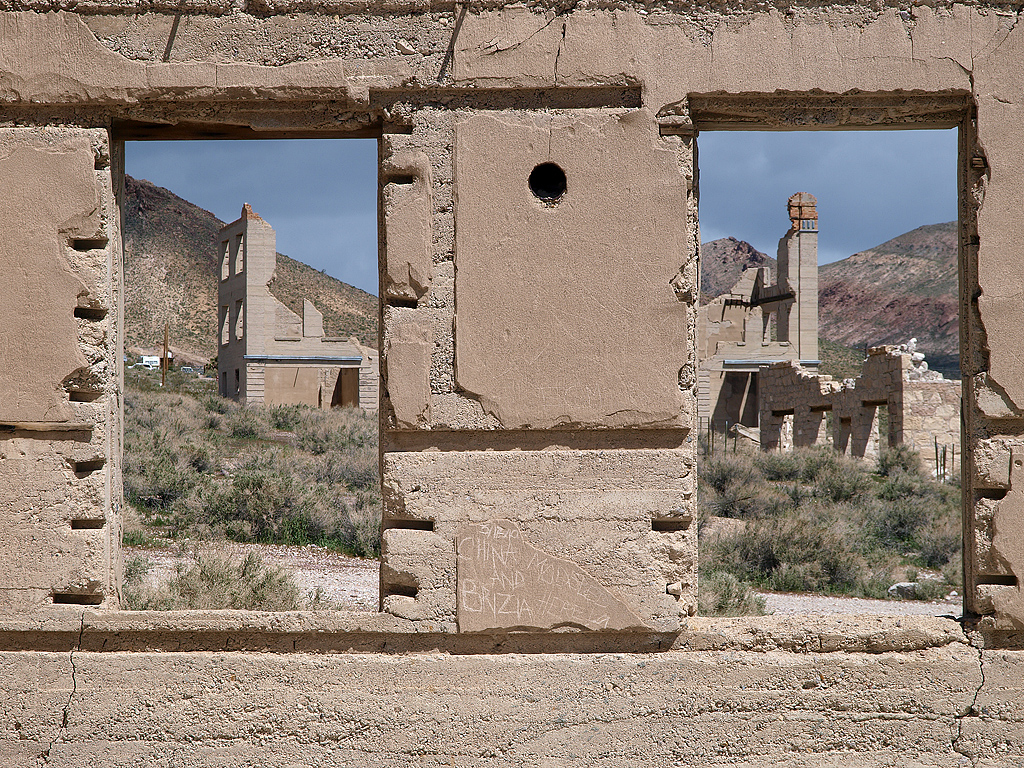 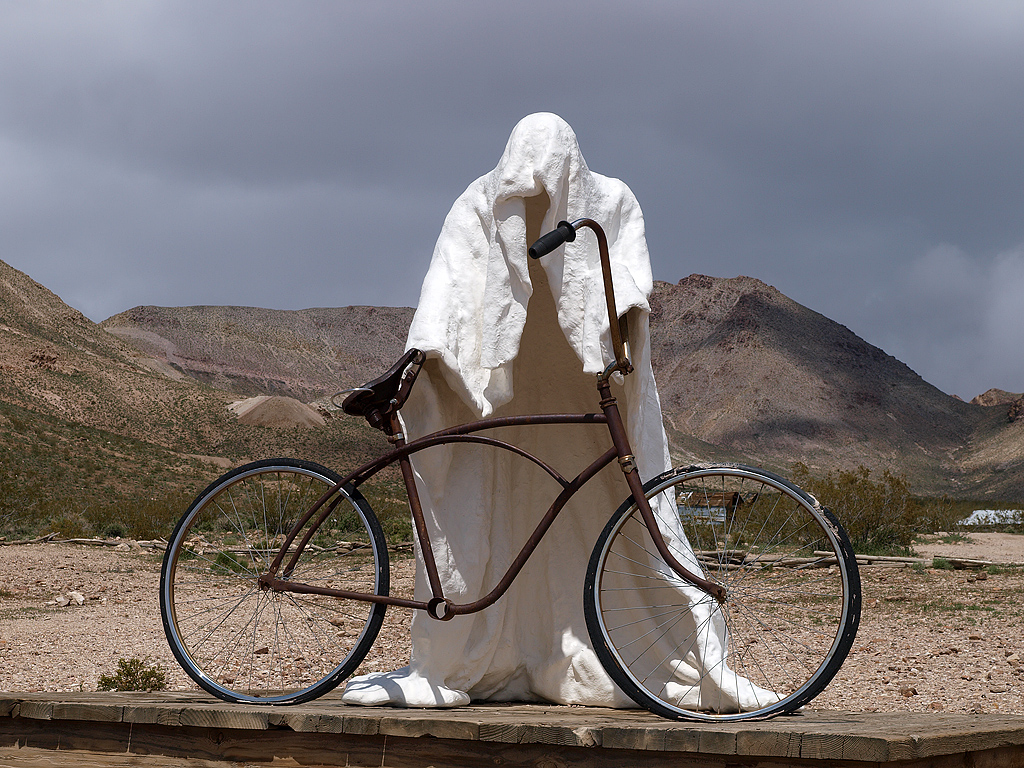 Another day took us out to BFE, but it was still fun: 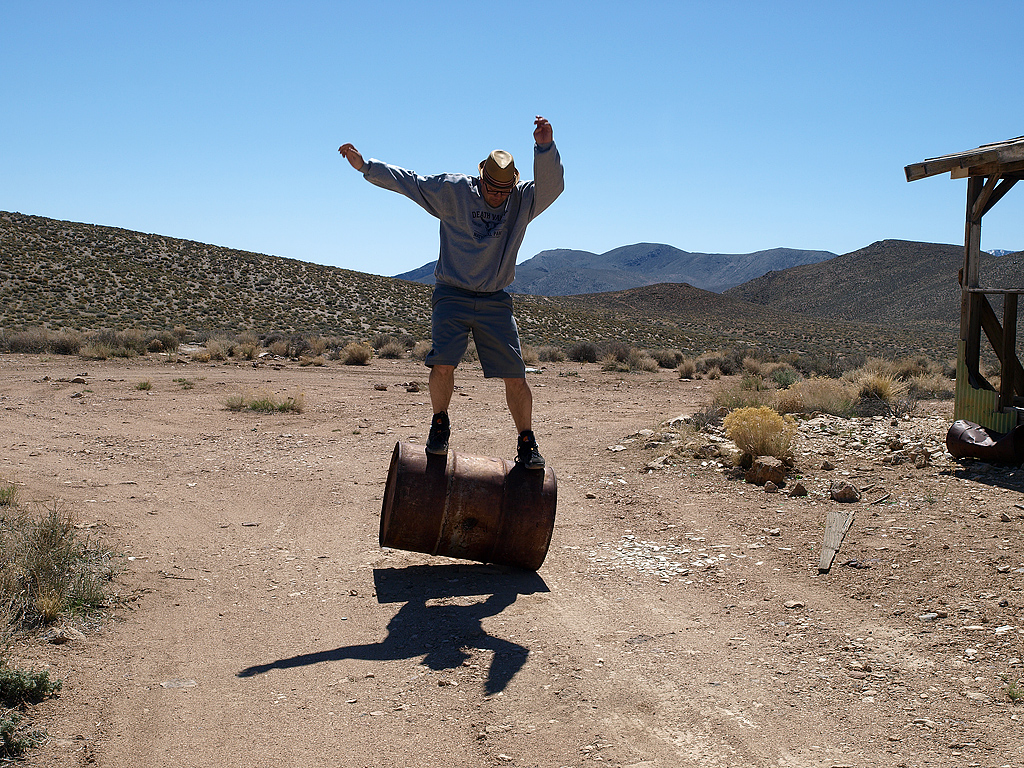 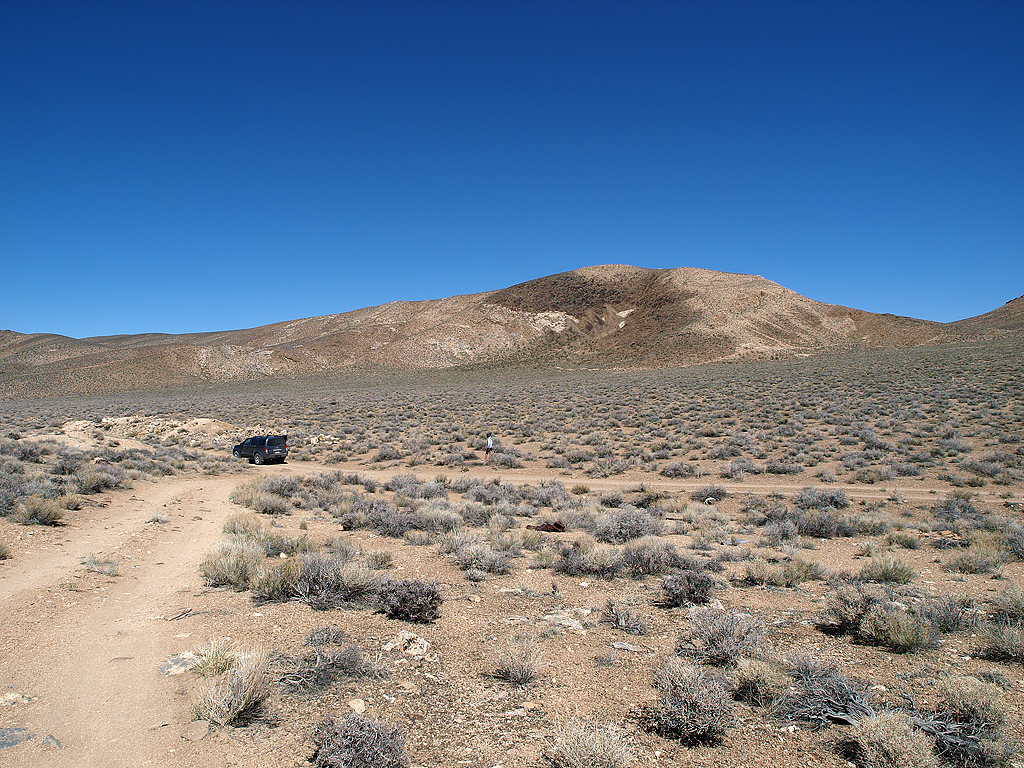 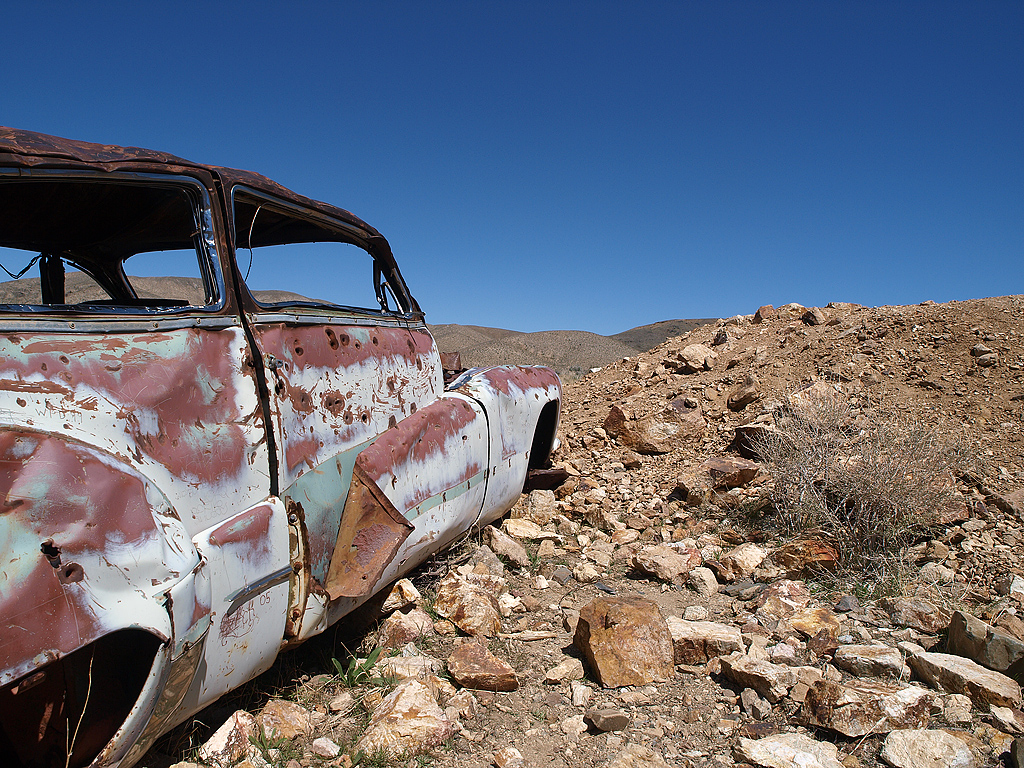 The day after Carl had his mishap, we drove out to the Racetrack. Naturally they were doing construction, so we ended up having to stop twice and just wait. I'd say we spent probably a good 2.5 hours of waiting in a line of cars that stretched more than a mile at each stop. Pretty lame. 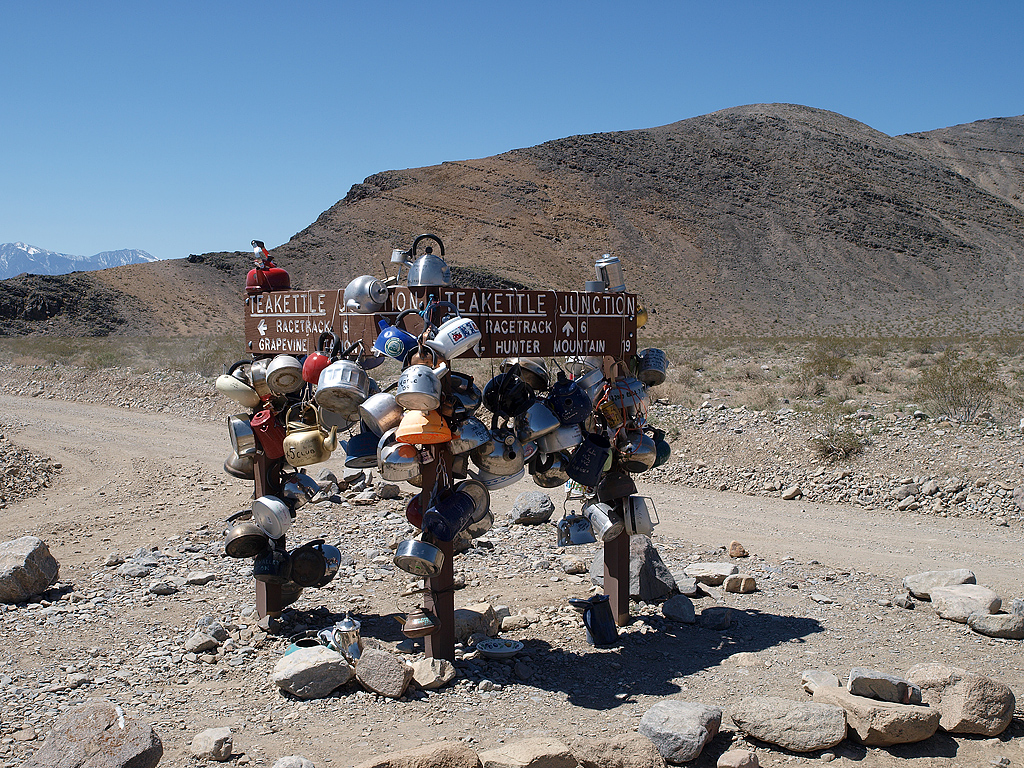 This sign was new. They had new water "troughs" at the campgrounds for washing dishes. There is now an actual paved pullout and large parking lot at the sand dunes, instead of previously only being able to pull off into the dirt on the side of the road. Death Valley must have received about 20 years of maintenance/improvement money, because things were new everywhere. 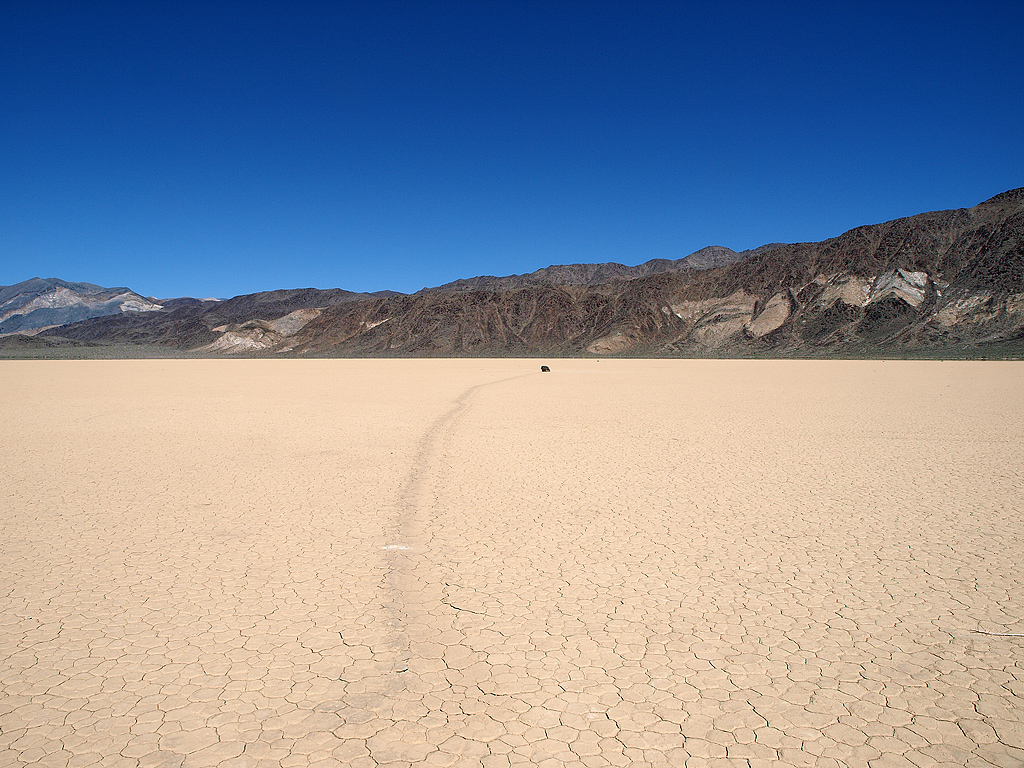 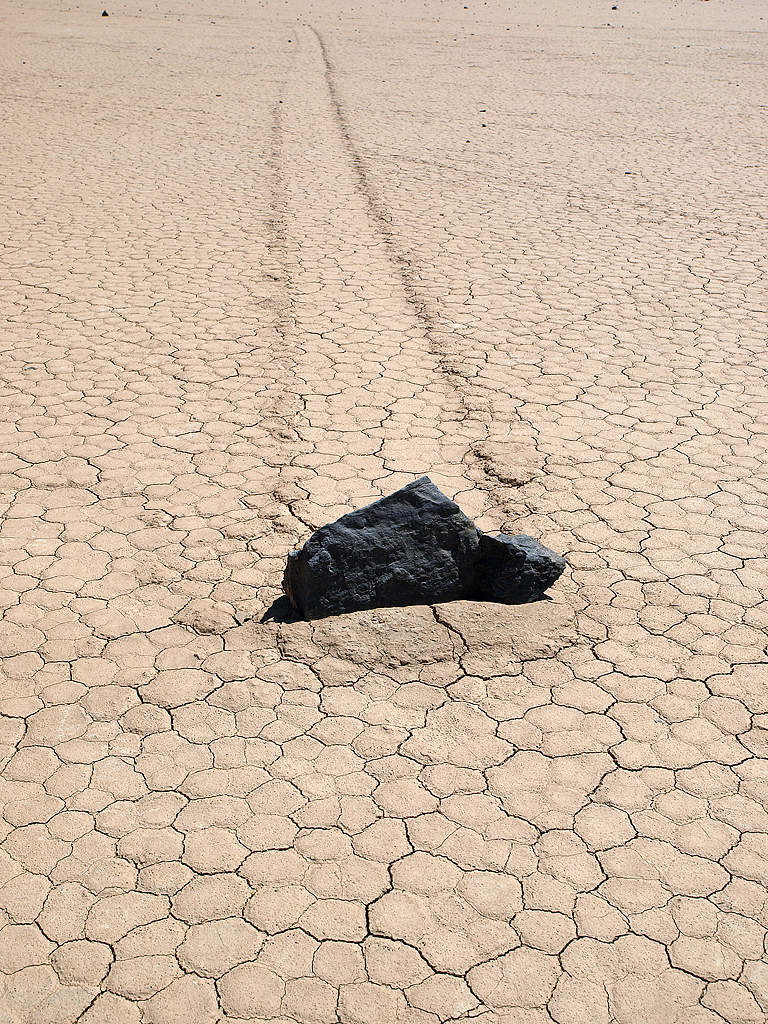 We continued southeast of the racetrack and did a bit of exploring on small tracks/trails. We came across this old mine & a couple of guys in a jacked up Toyota came by a few minutes later. They were very impressed that I made it over the trail okay, because it was pretty bad (according to them). 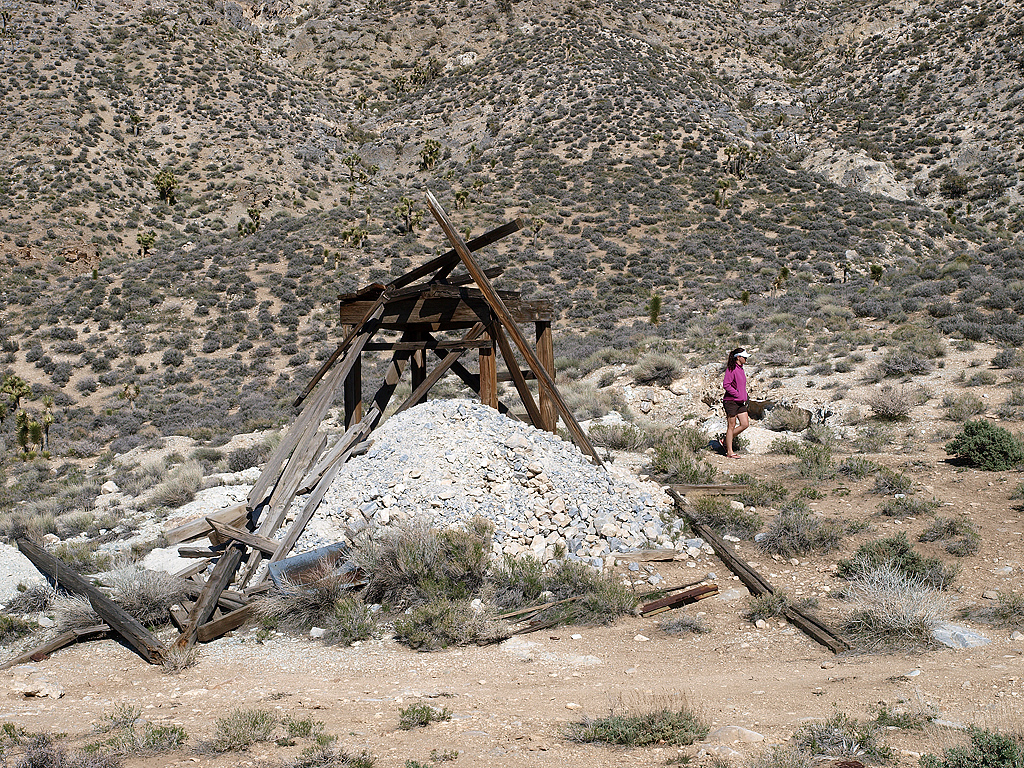 A few minutes after leaving this mine, I realized a few seconds too late, that I was pretty sure we just drove over a rattlesnake. I backed up & it was indeed a rattler, although it was completely flattened by my tires. Still wiggling around though. We drove up over whichever mountain pass it is that leads back down to Saline Valley. Well, that was interesting because a lot of the road was covered in snow (most of the road is in the shade), and if it wasn't snow, then it was just tons of mud or streams of water. Made for an interesting drive. Found a nice little meadow with a number of springs up on one of the mountains: 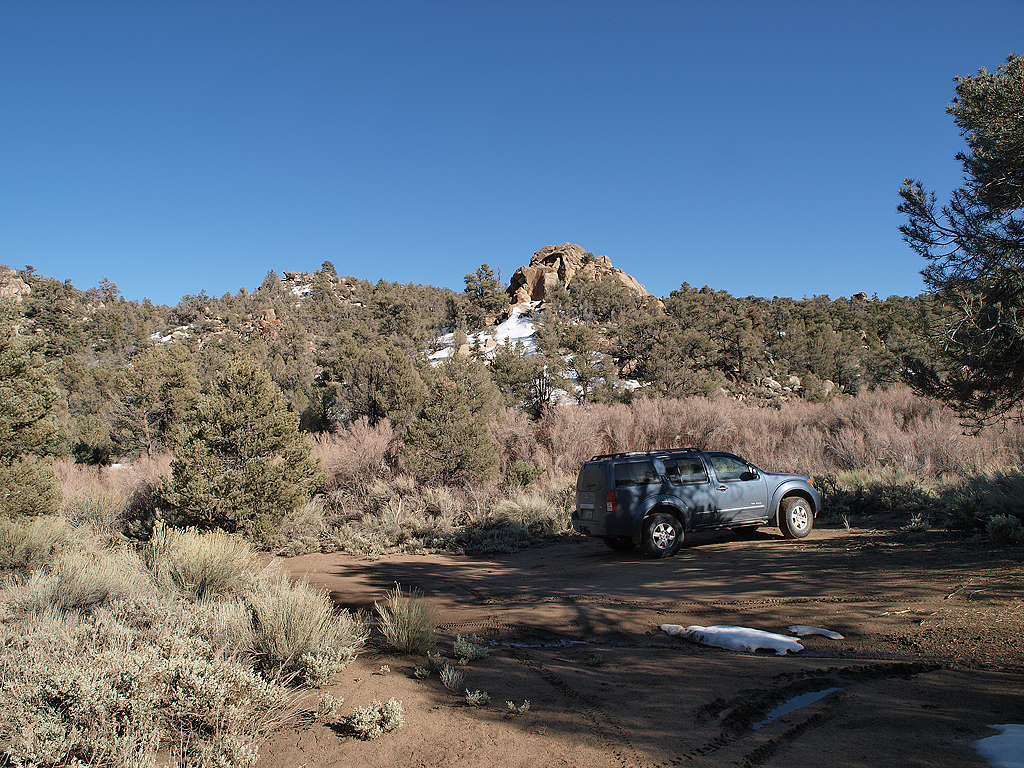 The sagebrush on the road into this spot was probably 4-5' tall, and it grew out & over the trail. All we heard for a few miles was this awful screeching of the sagebrush grinding along the sides of my poor pathfinder. When we got to Saline Valley, there was a big sign in the middle of the road facing the other direction. When we passed it & looked back, it said ROAD CLOSED. That would explain a lot.

The last day we were there, we drove out to Fish Springs Wildlife Refuge, which is east of the park in Nevada. Pretty nice area & they also have the rare Pup Fish like they do in Death Valley. We couldn't do much else in the park because a lot of the roads were closed because of construction. On the way back in, I noticed these brialliantly orange bushes that I had never seen before, so we stopped & had a look. Must be some type of vine, something from another world, or something else entirely. There were no roots at all, they just entwined around any bush that happened to be there, from cacti to sagebrush. If there are any plant biologists here, I'd love to hear your theory. Looks like some sort of Italian pasta to me: 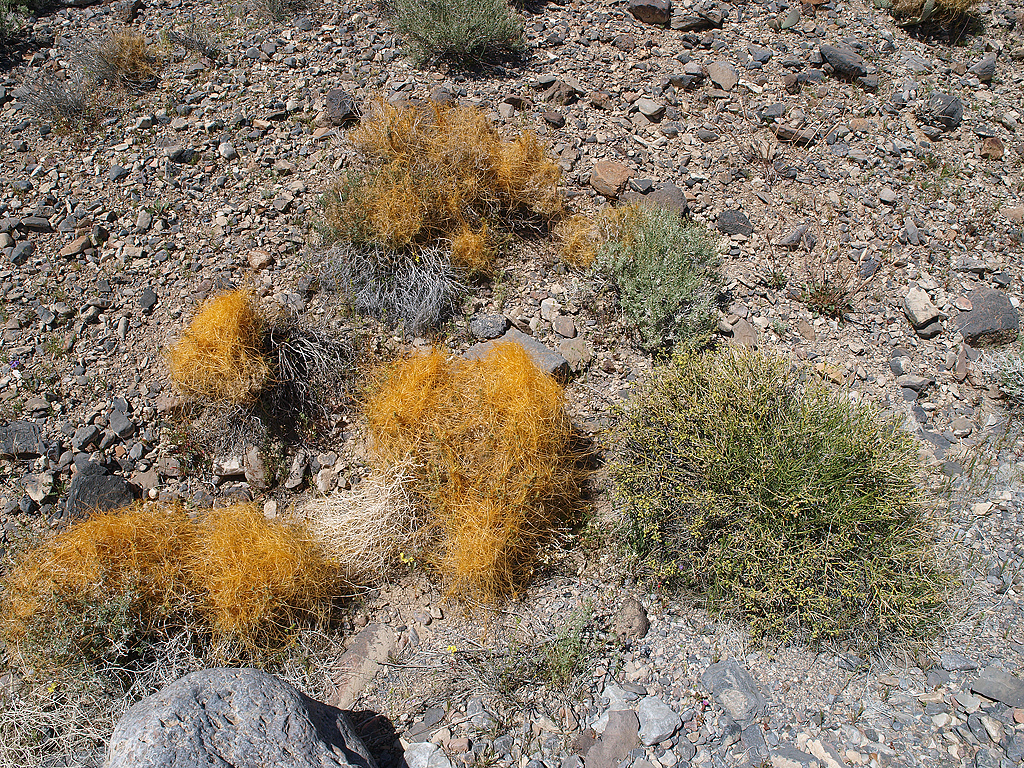 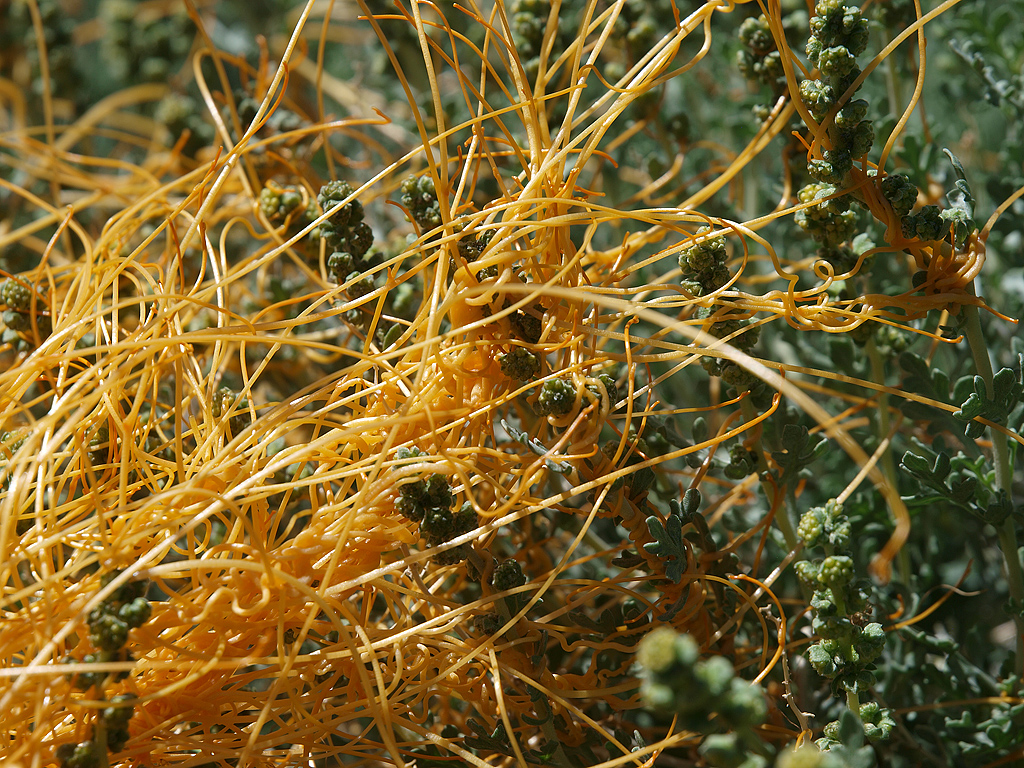 Awesome pics! (the Easter bunny creeped me out though! LOL!)
Top

theexbrit wrote:Looks like a fun trip! Any chance of doing this in 2012? I'd be up for it.

Yes. Last year didn't work out so well because I only knew a couple days prior that I was even going, but I am planning on a trip again this year. I'll post up the details/dates when I have them.
Top

Amazing pictures..Trip seems to be merely stunning!! I wonder about the art of photography..It recall me,my last trip to Ireland which I had planned with my family.
Top

Very nice pictures and write up abut your trip. This is the first time I seen this thread, I will look harder next year just in case you do this again.
Top
Post Reply
12 posts • Page 1 of 1