I settled on a 2008 G37 automatic as a donor because it had a 3.69 open differential. After 2008 Nissan went to 3.54 for the auto and the 3.69 only comes in the manual transmission cars, with the viscous limited slip carrier.
The VLSD carrier is wider than the open diff, and one of the axle shafts is shorter by 0,7". Supposedly the stock G35/G37 axle shaft (and therefore the stock Pathfinder axle shaft) can be shortened by a machine shop, but I didn't want to bother since the VLSD would provide virtually no benefit over the stock electronic limited slip in offroad crawling anyway.

On eBay the price for a 2008 G37 auto rear carrier are typically $200 - $300 but there are a few for under $200 and when I drove to a local salvage yard they dropped the price to $100 flat. When I took it home and opened it up it was perfect inside, in contrast my Pathy's was black with heavily worn spider gears and lots of shavings - probably from doing numerous of donuts in the desert.

The input flange, output flanges and rear cover have to be swapped, and the G37 auto has a weird Pinocchio nose on the pinion gear, but that was easily removed with a grinder and cutoff wheel. A slide hammer is needed to fed the side flanges off and an impact wrench to get the pinion nuts off, and a gear puller to pull the pinion flange off, other than that no special tools were needed. 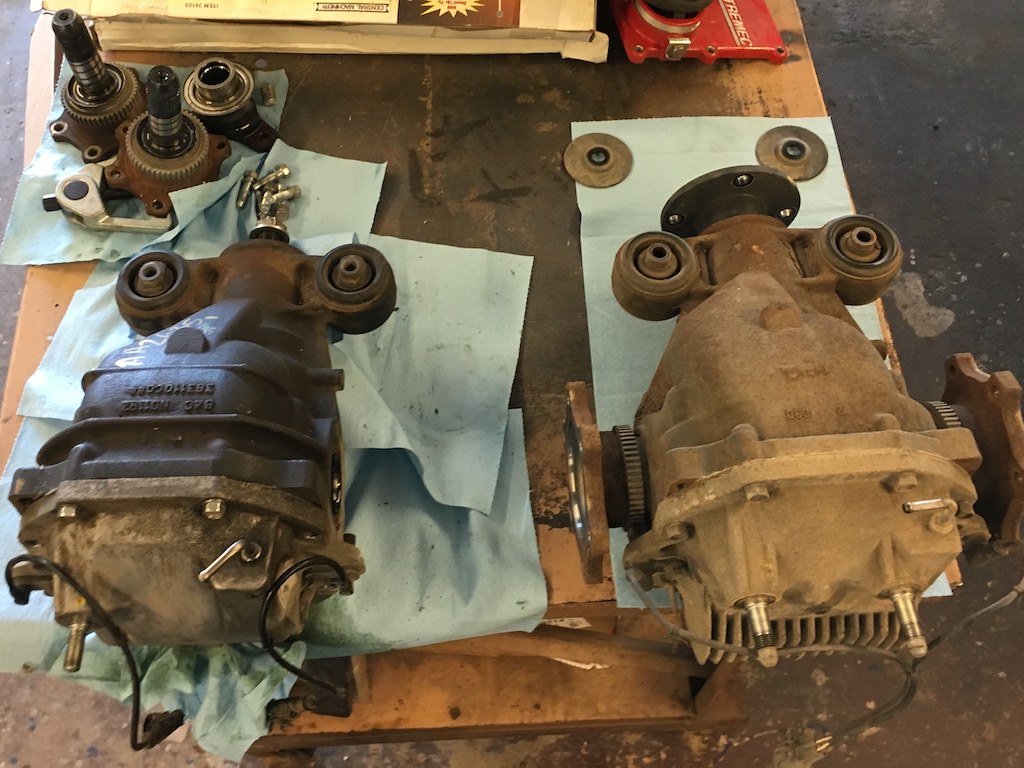 G37 on the left, Pathy on the right. Pinion flanges, axle flanges and rear covers will be swapped. 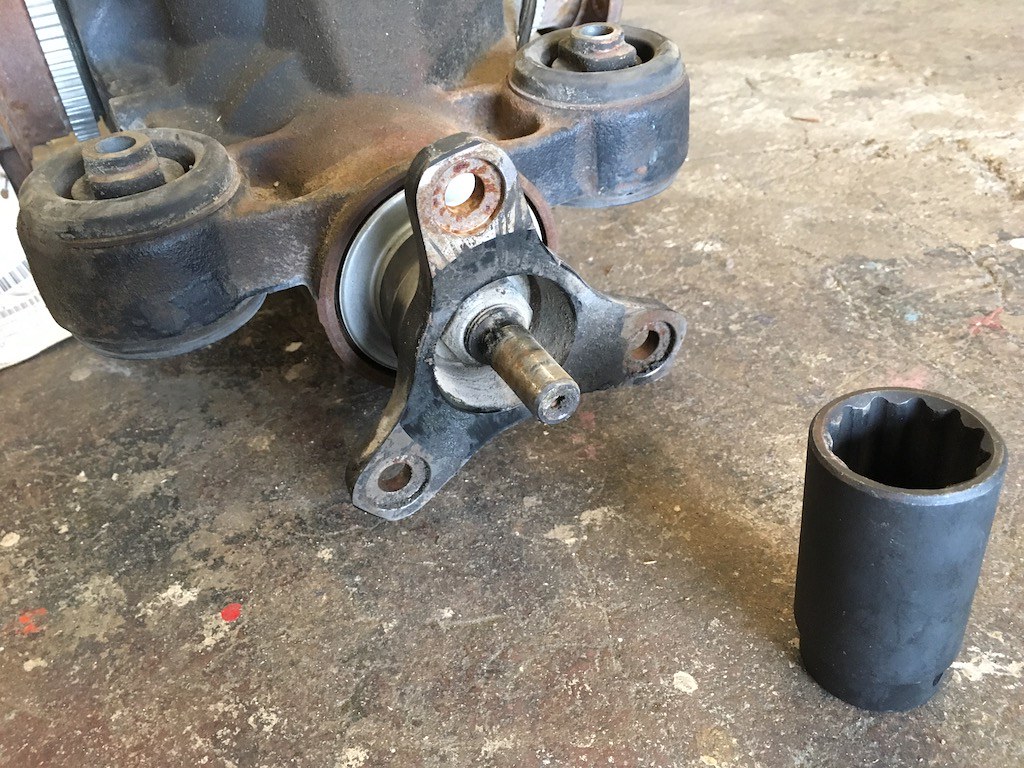 The G37 auto diff with 3 bolt flange and Pinocchio nose. 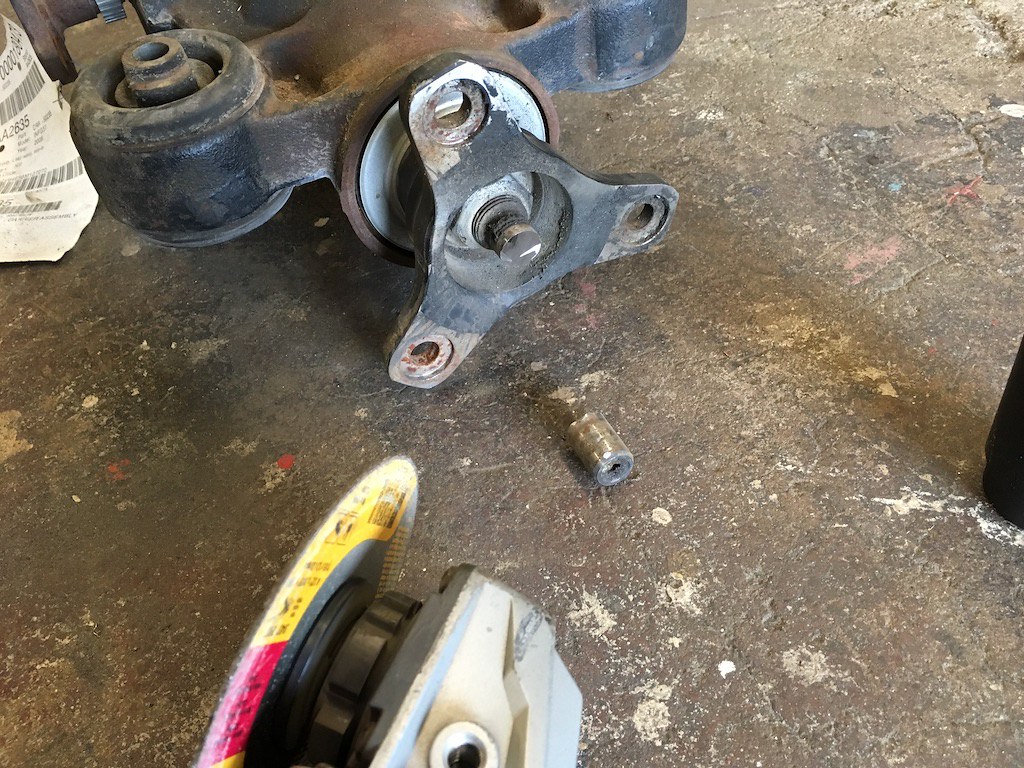 The nose had to be cut off just to get a socket on the pinion nut. 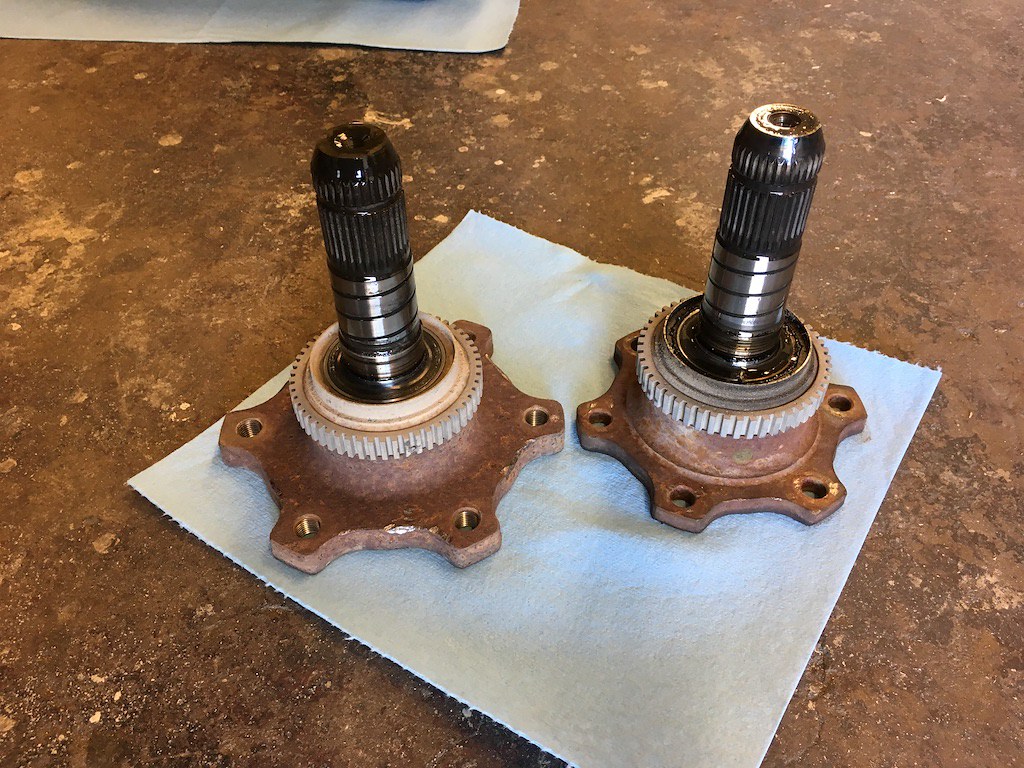 Pathfinder axle flange on the left, G37 on the right. Pull them out with a slide hammer. 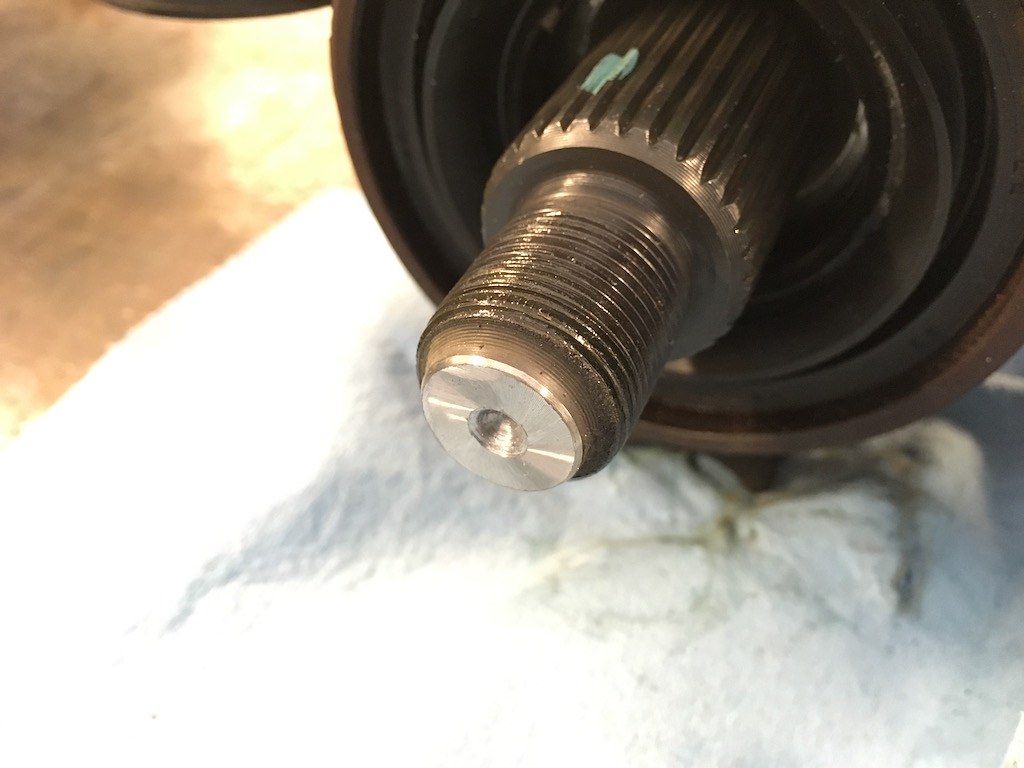 Cleaned up the stump on the pinion.

Filled with oil, put in the car. Works perfectly.

Could you swap just the gears instead of the full diff to get the same effect? Z1 Motorsports sells a 4.083 set for the 03+ G35/G37 so I'm wondering if this would be a direct swap into a V6 R200 rear (besides the need for a ring gear spacer since the carrier is 3.54 and down).
Top

Very nice research work. There is a thing as a titan swap that alot of offroad guys with frontiers and xterras do to get more suspension travel and thinking that alot have 6spd trans so you could also just swap the gears or entire diffs with them. Couple frontier and xterra forums out there. I ran ~35" tires on stock 3.36 gears and it wasnt too bad but 3.69 gears would of helped.
Top

RedZeppelin wrote:Could you swap just the gears instead of the full diff to get the same effect? Z1 Motorsports sells a 4.083 set for the 03+ G35/G37 so I'm Awondering if this would be a direct swap into a V6 R200 rear (besides the need for a ring gear spacer since the carrier is 3.54 and down).

Regarding the spacer, I spoke to Steve at Rugged Rocks at length about that and to use the 3.54 and down carrier requires a really thick spacer and longer ring gear bolts so it is not ideal. For ~$100 you can get the correct carrier out of a donor G35/G37 3.69. Oooor...for ~$1000 you can get an ARB locker with the correct offset for 3.69/4.083 - also my first choice if some money fell into my lap!

Now for the front R180A, there is a special 4.10 ring gear that is extra thick and goes into the 3.54 and down carrier without a spacer. Both 4x4 Parts and Rugged Rocks sell this R&P set.


Thupertrooper wrote:Very nice research work. There is a thing as a titan swap that alot of offroad guys with frontiers and xterras do to get more suspension travel and thinking that alot have 6spd trans so you could also just swap the gears or entire diffs with them. Couple frontier and xterra forums out there. I ran ~35" tires on stock 3.36 gears and it wasnt too bad but 3.69 gears would of helped.

I've seen the Titan swap for the front end, but for the rear that would require conversion from independent rear suspension to solid axle and that would be quite a project and a lot of bucks. Lots of gear options for that M226 axle though.
Last edited by kevinthefro on Wed Apr 11, 2018 10:21 pm, edited 2 times in total.
Top

Great pictures, very clear what needs to be done. And good point about the integrity of the carrier using the spacer, I hadn't considered that. I'm assuming that a donor carrier from one of the G35/G37 diffs would be a direct swap (i.e. no machining necessary)? Also, you mentioned the possibility of an air locker with the correct carrier split for higher (3.69+) gears, do you happen to know the model? I can't find anything on ARB's website that would be a direct fit to the R200.
Top

In terms of the G35/G37 carrier being swappable (or the carrier from the rear of a Frontier with 3.69 for that matter) yes I believe it is. If I was changing the ratio to 4.083 I would have harvested just the carrier, but keeping the same ratio it made more sense to swap the diff intact and avoid the expense and effort of shim kit and setting backlash and stuff.

In terms of the air locker, the short answer is: call Steven at Rugged Rocks (909-547-4651) and he will get you the correct locker and associated parts.

The looong answer is: the C200K (Xterra and Frontier solid rear axle) and R200 (Pathfinder IRS) differentials are internally interchangeable in terms of carriers and rings and pinions. ARB has the RD196 listed as the carrier for the C200K, for all ratios. This unit works in the R200, but Steven found the "all ratios" part is wrong - it is only 3.54 and down. So if you want a locker for 3.36 or 3.54, use RD196. ARB does not have a direct-fit locker for 3.69/4.083 for the C200K/R200. (Note - ARB has known for at least two years that the RD196 is not for "all ratios" but they haven't corrected their documentation. They just let customers buy it and find out they need a spacer the hard way.)

I spoke to Steven a few weeks ago wanting to do the same thing, but he has another approach - last month he installed the RD201 (made for the Terrano C200, not the C200K https://www.arb.com.au/assets/air-locke ... _chart.pdf page 8 ) into a C200K with 4.083 gears by machining snap ring grooves into the side gears, drilling out the carrier ring gear bolt holes to 13mm and using special spacer bearings - and thus avoid the ring gear spacer. Using the RD201 was originally brought up in 2015 by docwatson but it wasn't attempted at the time. http://www.thenissanpath.com/viewtopic. ... sc&start=0 Now Steven has proven it can be done, and he feels this is a more robust approach.

And again, if it fits in the C200K, then it should fit in the R200, but in reality no one has done it yet.
I think Steven knows what he is talking about and I will be happy to be the first to do this as soon as I get an extra thousand dollars to burn on toys.
Top

I Will spend a grand on a rear SAS first then locking the stock R200.
Probably go with an Armada R230 first.

I been brainstorming my Titan width M226 with Elocker for a couple months now just don't have the cash flow to begin the rebuild on it. I have met aussie370 he no longer has that pathy sold it to a dealer for around $4k has a 4runner now. It had 4.10 gears front and rear locker all done by ruggedrocks. I wish he would of parted it out before trading it.
Top 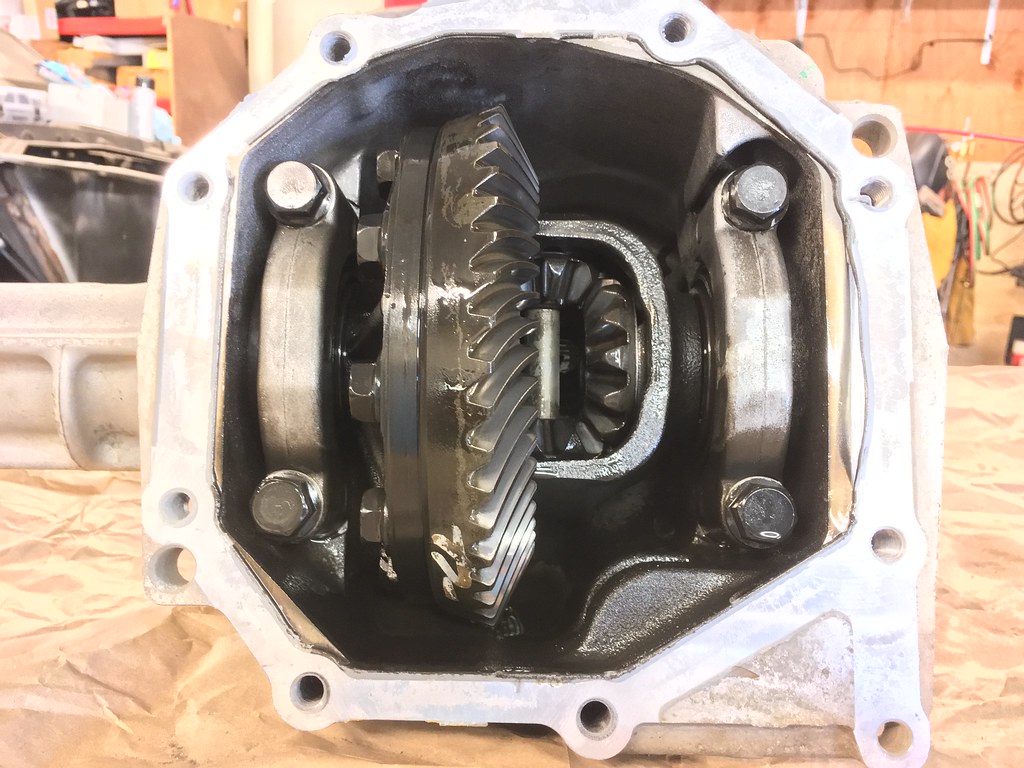 Rinsed some rainwater and dust out of the side splines with WD-40, opened it up and the internals were in perfect shape. 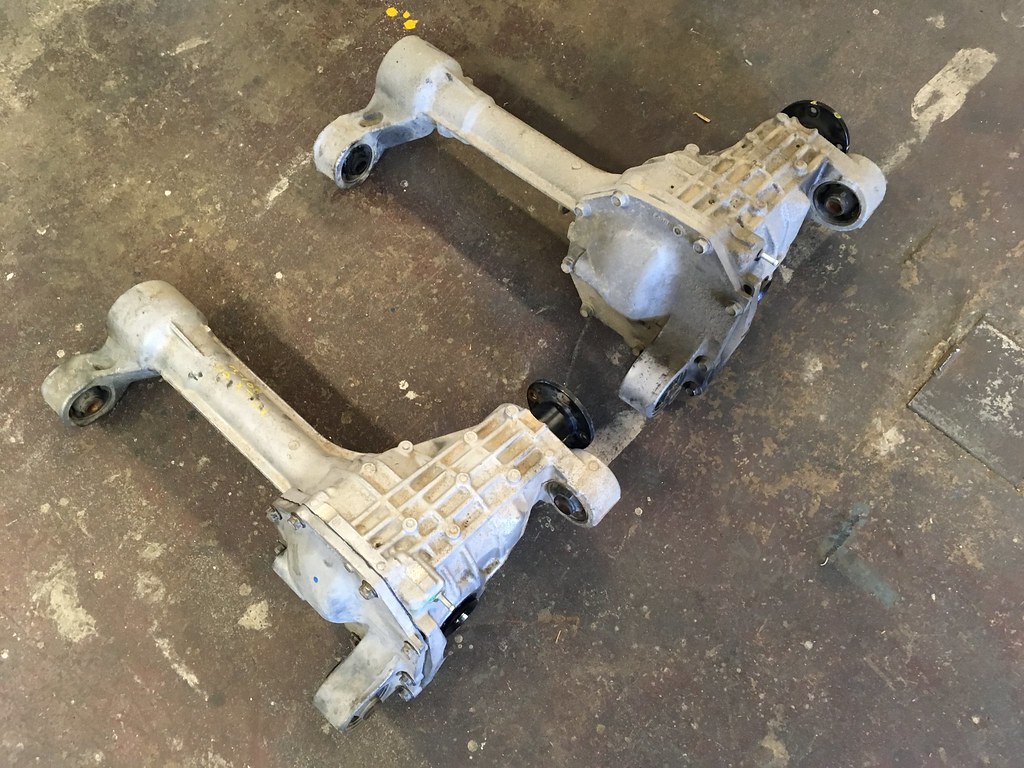 Resealed and refilled with gear oil. Pathfinder 3.36 in front, Xterra 3.69 in back. They are externally identical 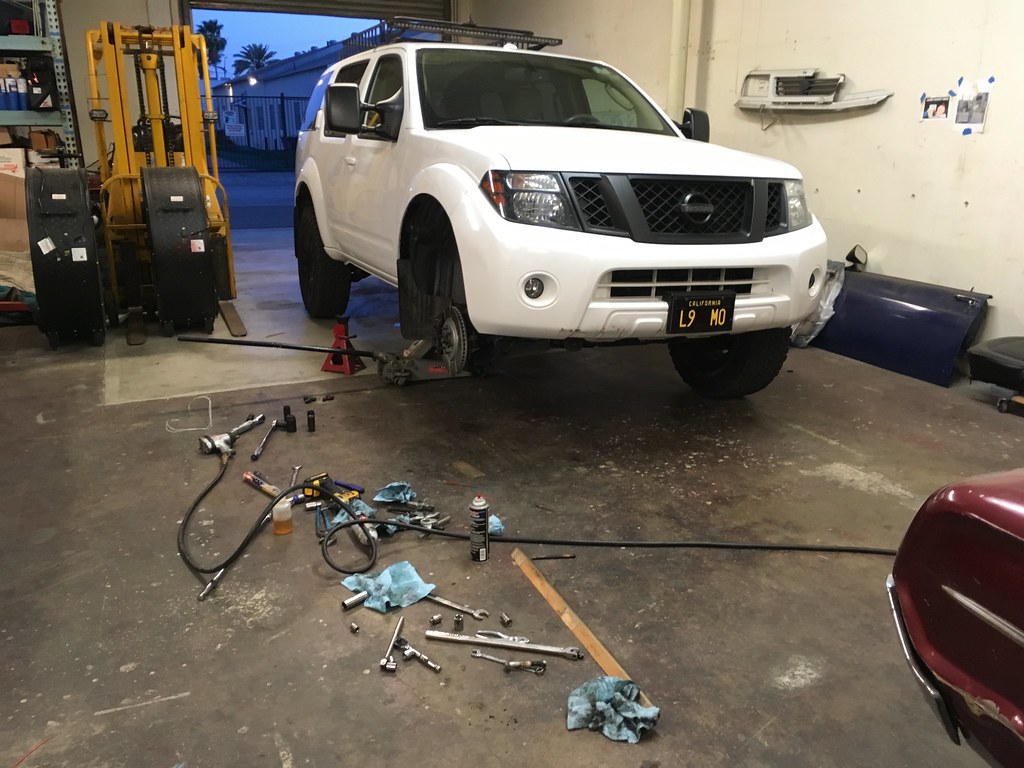 Wrapping up the swap. Biggest hassle was a frozen mounting bolt that had to be heated with a torch to get off.
Biggest mistake was trying to remove the diff without removing one axle first. You must remove one axle, you can leave the other in place and slide the diff off/on it.
Final assembly issue was getting the c-clips to snap back in place. The left side popped into place easily, but the right side needed a smack. I tried hitting the end of the axle with a rubber mallet but the CV joints are all springy and bouncy and just laughed at me. after two hours of struggling I finally invented a trick of grabbing the axle shaft close to the splines and rapidly repeatedly pushing it into the diff (smack, smack, smack) with short strokes until it suddenly popped in. Kinda like jerking off in reverse.
Top

I did this upgrade last week as well and I'd like to share some warnings and advice that I discovered. Keep in mind I did this as a driveway mechanic so the tools I had were very basic.

1. Remove the UCA, tie rod, and brake caliper from the steering knuckle before attempting to pry out the axle from the front diff. This will let it droop away from the body and give you extra clearance.
2. The rear diff sits higher than the front so make sure whatever you use to raise/lower the diff can reach it safely.
3. An impact wrench with deep sockets is insanely helpful since some of the mounting bolts for the diffs are very stiff and the bolts protrude.
4. Without a siphon or some tubing, filling the diffs once they are in place is difficult because of the position of the filling holes. Side note, the fill plugs use a T-55 star bit.
5. To push the front axles back into the new diff, I used the rods from the tire changing kit braced against the frame. They are thinner but still stiff enough to get the job done while being easier to maneuver than a prybar.
6. Ensure that the front/rear wheels can spin freely, this makes it easier to get to the hard-to-reach driveshaft bolts and the rear axle flange bolts by rotating the flange.

This can all be accomplished with common hand tools, but the two items that were necessary for the project were a flange puller and corded impact wrench. I rented the flange puller from a nearby Oreilly's since I didn't feel like hitting the pinion flange with a mallet for half an hour. It also helped remove a few seals. You don't need to go corded if you have an air impact wrench, but like I said I did this in my driveway so a full garage would have been helpful. Note that the pinion nut is a 30mm socket.

I also installed the ARB differential breather kit while I was down there. Only difficulty there was the plastic tubing takes some effort to slide onto the port, and there isn't much room in the engine bay to mount the intake. I ended up mounting it on the driver side next to the master cylinder. I can provide pictures of the mounting location if people want to see.
Top

The carrier I got was from an 07 G35. Luckily there wasn't a pinion stump so no grinding had to happen. Externally it was very rusty but the internals were in perfect shape, the description said 58k OEM miles on it.
Top