Does anyone have any info on a major re-design for 2011? The current line is now 6 years old, is it time?

PFME63 wrote:Does anyone have any info on a major re-design for 2011? The current line is now 6 years old, is it time?

It's time. Lots of speculation on this, based on rumor and a few published interviews where someone from Nissan made a few remarks. I still haven't heard of anything being set in stone, but the last I heard, they were going to make a change in 2010. That's obviously not the case now, so 2011 could be possible. I'd imagine they are eyeballing the US market with great interest.
Top

ok from the news ive read,,to start off,,the nissan armada is going to be discontinued soon..and the new nissan patrol (one of the meanest off road machines around) is gonna be taking its place (this will be a first since the Patrol had never been introduced to the American Market before)..along with this the infiniti QX56 is also gonna be based on the same platform as the Nissan Patrol..

So where does the pathfinder fit??Well from what ive read,,The pathfinder is also going to be based on the Nissan Patrol's platform (similar to how they used the F-Alpha on the current R51) inorder to keep production costs down..This means that it "mite" get a tiny bit bigger in dimensions. Also expect a redesign by late 2011-early 2012..
Top 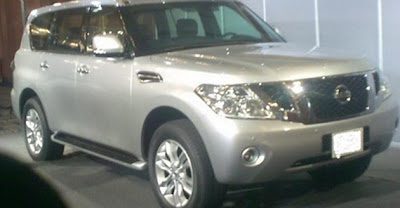 Looks more like it would replace the Xterra
Top

Looks too much like the Highlander to me...
Top

I just threw up in my mouth a little after that pic!
Top

Those were just a screening for some VIPs and some of the industry ppl to get a feed back..It was held some where in the middle east,,the organizers who held the event made a big fuss after some of the images got leaked out cos one of those 'officials' who were invited took couple o pics.

The shape is not the final official one but based on the feed back received from the middle east, the front end is most probably gonna be kept,,the rear might change..

Anyways people who like the Landcruier 200series,,will love this new Gen Patrol..And its much bigger than the Xterra..
Top

already out here on preorder (saw one camoed on the roads), officially to be released within the next year i think.

dont hate the looks guys, it'll grow on you.

interior is almost the same as the 08-09 version with some minor improvements in the screen display and the reverse/side parking cameras.

larger than it actually appears in the photos,


while i LOVE the patrols current beast looks, maybe time for a change ?

pathfinder, no info yet, nissan saying no changes till end of 2012.
Top

It has the Land Rover, Range Rover look in front and sides, and the ass end looks like the new Mazda 3. I like my 08 much better.
Top

Looks like a pathfinder grill and cube rear on a rogue platform. I'll stick with what i've got thanks
Top

I too will be keeping my 05! And fender vents WHY? How dare they! They were ok on old buicks from the factory, but now a days people are sticking them on everything... Lets hope they take them out of the production model!
Top
Post Reply
24 posts