dealer had said something about needing to change out my belt. so i bought the belt for ~$28 and did it myself.

it's not -too- hard, but i would highly recommend you have a breaker bar.

so what i did was took a breaker bar and put it on the 14mm bolt that's in the center of the tensioner. you then rotate counter clockwise and it will release the tension.

problem is once you get the belt off, you can't "let go" of the breaker bar, because it will try to rotate too far. so i just put the end of the breaker bar against the plastic intake (i'm a v8, not sure how this would work on a v6) tube and that worked.

unrouting and rerouting the belt is "fun".

On my V6, the tensioner has a 3/8" slot where you can put a ratchet in and release the tension...I did mine by myself and tied off the breaker bar with a small rope

I also removed the front part of my air intake..took about a half hour.
Top

Should also be noted that Nissan had some issues with some serpentine tensioners on early R51's (noise issues) and released a TSB instructing to replace the belt along with a countermeasure tensioner. Also, many belts are now made of EDPM and don't show cracks and splits like older belts, though they still experience wear on the sides of the grooves of the belt. Tensioner springs also weaken over time, as well. While it may not be common practice yet, it's starting to be more common that replacement of the serpentine belt and tensioner should be done at the same time, especially now that EDPM-constructed belts can last over 70000 miles before needing to be replaced.
Top

If you don't pay attention to how the cable is run, followt his diagram:

Why do you have to keep tension on the tensioner when the belt is off? Can't you pull it back again once you are ready with the new belt?
Top

You don't have to. I'm not sure why that one guy said that.
Top

with the way i was doing it, i couldn't just "let go" of the bar that took the tension off as there wasn't enough room for the breaker bar to go anywhere without causing damage to something. i ended up 'resting' it on the air intake while i had the belt off, but the problem with that was the intake curves there right above the intake mani, so if that bar started to slip it would have taken my arm off or broken the clutched fan. my other fear was that if the breaker bar slipped off the socket on the tensioner that i wouldn't be able to get the tensioner back far enough to get the belt back on.

i'm also a v8 so you v6 guys might have more room in the engine bay to work with and might not see/understand what i'm talking about. on my engine there's -barely- enough room to get my hand inbetween the belt path and the radiator. the area where the clutched fan is was a big pain and i just about cut my arm trying to get the belt through that area as there was zero room there. I'll try to get some pics about what i'm talking about later this week.
Top

Ahhh..that makes sense. Ya there's quite a bit of room on our v6's. Thx for clarifying.
Top

just FYI belts are around $10-15 on rockauto.com

You don't have to. I'm not sure why that one guy said that.

I tied mine off with some nylon cord till I got my belt back on; I wasnt sure what would happen if I let it go, but didnt want to find out the hard way.
Top

Cheap belts are not always the best choice. Many tend to get noisy in a short matter of time. For Nissans, I've found genuine Nissan or Bando brand belts work the best. Some of the aftermarket belts tend to be sized a little longer or shorter or made from inferior materials. A lot of the big brands like Gates or Dayco have "premium" and "economy" grade belts, so it's always better to go with the best quality belt they offer if you do go aftermarket. Also, now that belts are made with EPDM, they tend to last 70000-100000 miles and show little wear. It's getting to be a more common practice of replacing the serpentine tensioner along with the belt, especially on the V6 R51s which have had some issues with noise due to the tensioner (refer TSB).
Top

Just changed this belt on my 2006 V6 as it had an occasional squeal and 78k on the odo.

I know some others have asked for a DIY on this, so here's a quick write up post change.

Here's a pic that highlights where you will need to unscrew/unbolt something: 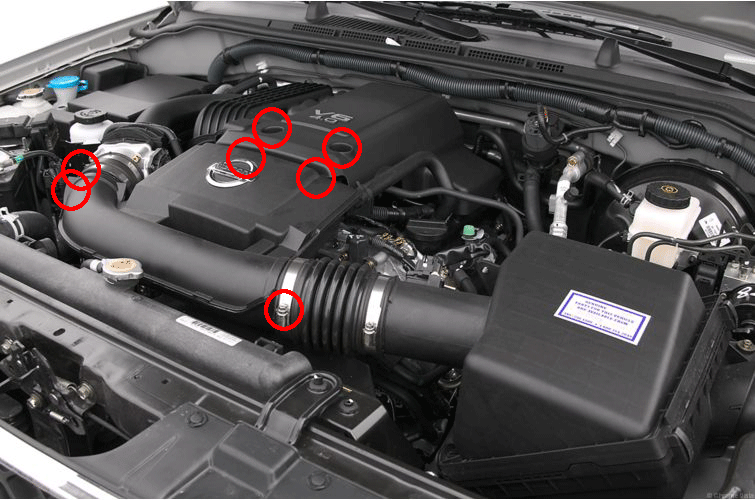 2. Pop the hood, and remove the air intake plumbing.
- There are two 10mm bolts that hold the engine cover onto the engine and partially block the resonator box, which you will want to remove.
- Unbolt the cover and put the two bolts aside.
- pop the cover off so you can get to the two 10mm bolts with Phillips-head screw slots (use some muscle and it will pop off - it just needs to be out of the way, no need to take it completely off)
- unbolt/unscrew the two bolts that hold the resonator in place, put these two bolts aside.
- Now, use the flathead screwdriver to loosen the clamps at the intake and the airbox. I loosened both the clamps on the intake and the left-most one by the airbox.
- pull the intake plumbing off the intake and the airbox so its free, and move it off to the side. There is still a bypass hose attached, but it is flexible, so no need to mess with it.

3. Pull the old belt out.
- you should see where the 3/8 driver slots into the tensioner. Simply insert the driver and push down/counter clockwise to slacken the belt
- slide the belt off the tensioner, and once its clear, slowly let the tensioner come back up/clockwise until its fully extended
- pull the old belt off the pulleys, and take note how the belt needs to thread around/under the fan pulley, since you will need to reinstall the new belt this way and it can be a bit confusing

- If you want, make sure the engine bay is clear, and start the engine for a couple seconds to ensure the belt is seated and moving properly. The engine will not run smoothly without the MAF registering air flow, so don't idle the engine or be concerned with a rough idle - you just want to get the belt moving and see that its fitted properly.
- If everything looks good, resinstall the intake plumbing

Its an easy job, just be mindful of the cooling fan blades, they scraped up my right arm pretty good while I was trying to place the new belt.
Top

you may want to clean that engine soon..

Lol, I wish that was my engine bay! That's a stock photo I grabbed quickly for the post. Having just gotten the truck, I have been too busy driving and fixing stuff to do a full detail on the bay yet.

Thanks though. Shop manuals are great, but nothing beats a step by step DIY for the willing shade tree mechanic.
Top
Post Reply
28 posts