I have an '08, LE, R51 Pathfinder with no heat in the cabin. I have verified the system is properly serviced with coolant and
know that the engine coolant is running at 195F. So I have looked into the heat control valve assembly that is mounted on
the passenger side firewall in the engine compartment. I have taken the valve and hose assembly out of the car and am
wanting to buy a replacement, the control voltages are getting to the valve, however, it is not opening. Occasionally on a
rough surface it might open and allow some hot coolant in the heater core, but 95% of the time it won't actuate. I am having
a tough time locating a source of supply that is not the dealer. I have studied many threads and youtube folks that show you
how to troubleshoot the valve and hose assembly. Does anyone have a good part number for a Pathfinder that might be out
there and considered an "Aftermarket" part? These items seem to be a high failure component, all I can find are the ones
made for the Titans and the 5.6L Armada series vehicles. Any assistance is appreciated, I just hate to go to the dealer and buy
parts. Thank you.
Paul

Do you have a picture of this part? I'm not seeing it on the diagram for the 06's so maybe it's a later component. I'm just interested for my own edification. I don't have any solution for your aftermarket part number request.
Top

I'm not aware of any coolant valve on R51's. There is a "heater pump" that is an electric water pump that helps push coolant through the heater core that is used on the V6 engine, but I don't think it's used on the V8? Here's a link to a picture of the V6 heater pump: 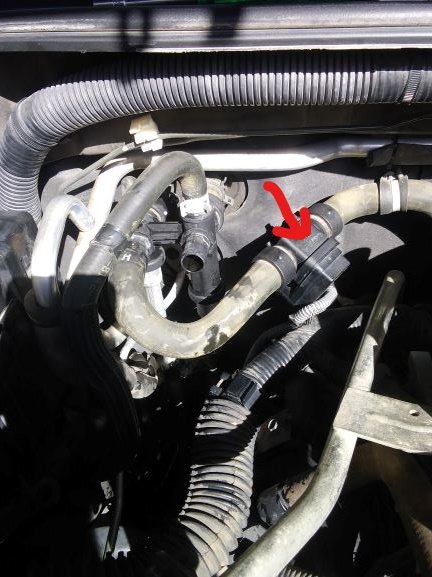 The valve is controlled by the climate control system in the cabin. The photo
shows the installed position of the valve. The assembly consists of the valve and
two hoses which supply the heated water to the core in the cabin. The valve
consists of a small motor which drives a worm gear which positions the valve for
water flow. The plastic parts wear and the operation becomes intermittent. Now
it is so intermittent, it will not work at all. (Return hose removed in photo)

The thing that is so frustrating is there doesn't seem to be a source of supply for
just the valve and locating this on any website is not happening either. There is
one part number on the valve and that is: H57 Z1000 and is made by Cooper
Standard. These valves are common on a great many Nissan products, just not
able to find one for my PF. I thought others may have had issues with these valves
as I would anticipate anyone will eventually, given the weak design of the plastic
parts and the load on them caused by an aging valve. No leaks, just no consistent
valve operation. Thank you both for taking the time to look at this thread. I may
buy an aftermarket unit sold for another model and R&R the valve unit.
Top

I contacted the dealer and found that the part is available in Dallas and I could have
one for roughly $215 delivered tomorrow. If anyone is interested in buying one of these
valve and hose assemblies the P/N is 92400ZS22A.
So I decided to test my theory on the valve and its function. I modified the hose clamps
and removed the plastic parts and gave her a test. Two photo's attached show the
modified configuration and the installed configuration without the cover plate. I wanted
to work it and measure temperature response.
I ran a test for an hour to note that with the valve open at the 12 Oclock position, the cabin
air temp was 140F at the center register. I move the valve to the 3 Oclock position and the
cabin air temp blew ambient. So, for now, I will await the cold weather and do some more
testing so I can find the ideal "Winter" temp. In the spring, I will close the valve.
I carefully changed the clamps from factory installed plastic (Permanent) to regular hose
clamp for quick disconnect when and if I do find the valve I want for the price I want. I
also put a little silicone grease on the inside of the hose where it mates with the tube so if
I want to separate them, it will not take a stick of dynamite. Attached find a couple of more
photo's of the modified valve assembly with plastic guts out and installed for the test.
I will find a valve, they are out there, just needed to get some heat because old man winter
is a comin.. Cheers..
Oh, I placed a small plastic cover over the electrical connector and zip-tied it for when I get a new valve. 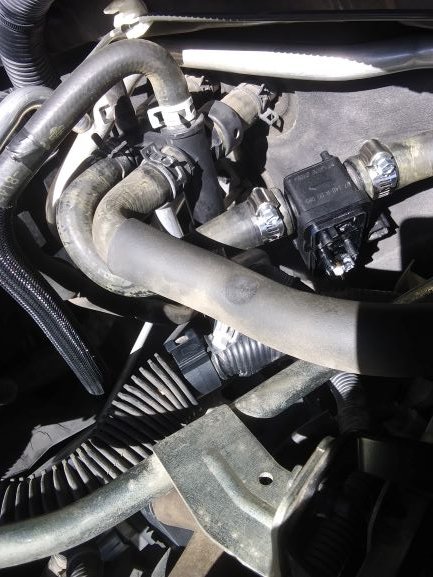 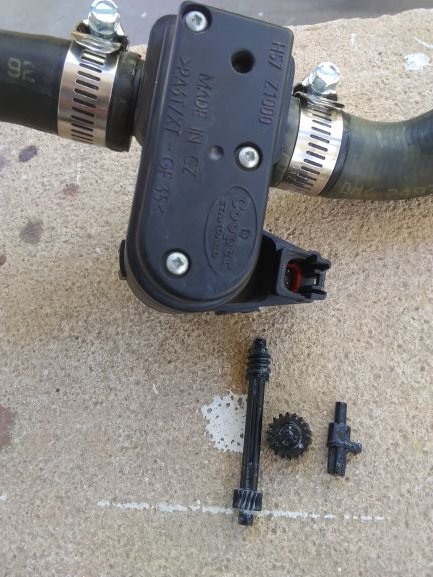 So it is what I thought it was, but the V6's don't appear to have one at all. Like SMJ pointed out, all i could find was a heater pump that was similar. Must be a V8 only part.
Top