Oh yeah, it's the geek bling with flashing lights, just can't get enough.

Is anyone using Topo maps on their Garmin Nuvi GPS's?... How does it work as I have heard mixed results... Thanks!........ Triffid

Triffid, I also replied to your PM, but thought this might be helpful to others as well.

There are two versions of Topo maps from Garmin: 10K resolution or 24K resolution. At present, the 24K resolution is only available for US National Parks and is divided by region (West, Central, East, as three separate products). The 10K version, is available for the US, Canada, and UK (also three separate products). Both maps are excellent quality, not scanned copies of paper maps that I’ve seen in some cheaper products. Aside from the lower detail – which is still excellent – the 10K maps do not have street routing information. This means you can only use straight-line routing between waypoints (e.g., Off-Road navigation mode).

Note that these are PC applications and must be installed on a desktop or laptop computer. From the PC you can find POI and create waypoints and/or routes. You then select map sections, user-defined waypoints and routes, and upload them to your Garmin GPS/Navigator. This is another important point: only the map sections you choose are uploaded to your GPS unit – if you drive outside of these areas, you’ll wind up with a blank screen and, in my experience, your GPS might lock-up (easily resolved by restarting and selecting a different map). Once the maps are uploaded to the GPS you can switch between them from the GPS menus. I don't know what the limits are for uploading maps, but I've got both the 10K and all the available 24K loaded for Moab UT, Rocky Mtn Nat'l Park and surrounding area in Colorado, and Yellowstone Nat'l Park in Wyoming, plus 10K for all of New Jersey, and haven't had any problems.

You can copy and activate your City Streets map license code from your GPS to the Mapsource application and enable that set of maps on your PC, which is great for working on long-distance and multi-stop routes. All the Mapsource maps are accessed via a single application, and you can easily switch among the different maps.

As noted, unlike the City Navigator and Topo National Parks maps, the 10K Topo maps don’t have street routing information. This can be an inconvenience if you find you need to change routes while driving and haven’t brought a laptop with the software and maps installed. In my experience this was not a significant limitation. I found all the major and most minor 4WD trails were represented in the base GPS street maps, although often listed simply as “unnamed road.” I could easily setup a route while viewing the street map, and then switch to the topo map to view and drive the terrain. The route remains active when you switch maps. (This technique also works well with the PC-based application.) The only problem would be if you changed your route so drastically that you would venture outside of the topo map sections you uploaded to the GPS. This would result in a blank screen and, occasionally, GPS lock-ups.

Aside from the lack of routing capability in the 10K topo maps, the only other issue I encountered is my Nuvi 760 says there’s no POI information available while using the topo maps. Enabling the city streets maps resolves the issue. This is listed as a potential limitation on Garmin’s website for the Nuvi series, and I haven’t looked into a workaround because switching maps is relatively easy and works fine for me.

I use the topo maps in two different ways: wandering local areas where I'm confident in the terrain, or planning treks through unknown territory. First, understand that driving a '07 Nissan Pathfinder means I'm not driving any category-5 runs or trailblazing. To date, every single trail I've taken has shown-up as a road -- often labeled unnamed/unimproved -- in the base Nuvi 760 street maps, or has been an easily-accessible area off a displayed road.

When wandering, I just make sure I have all the 10K topo maps I might possibly need, including a wide area of margin, loaded into the GPS before setting-off. I generally stick to the street maps unless I get into an unfamiliar area where the terrain starts to get sketchy. If I get hopelessly lost, I use street-view to plot a route back to pavement, and switch to terrain view to avoid major obstacles.

For areas I’m visiting and not familiar with, such as when I went to Moab and Colorado this summer, I research and choose my trails first, getting lat/long for waypoints, and plot the start, finish and a few intermediate waypoints on the topo map. I then switch to the street view and generate my route before switching back to the topo map and comparing with on-line or printed maps of what the trail is supposed to look like. I then review the terrain and elevation changes, fine-tuning if needed, before uploading the waypoints, route and all the map sections crossed – plus a wide margin in case I get lost, have to detour around an obstacle, or decide to be spontaneous. I can also print a copy of my route to leave with someone in case I don’t return when expected (important, because I often go off-road alone).

I also carry my laptop with me along with a car adapter and extra battery in a well-padded, waterproof case, just in case I go completely off the wire. Aside from my first trip out in Moab, when I was just figuring out how all this worked and was too rushed to get on the trails to properly plan and test the setup, I’ve never had to pull the laptop out of its case. But I do like to be prepared.

Overall, I am very pleased with the combination of the Nuvi 760 with both the 10K and 24K maps. I’ve owned and used similar software from DeLorme, Microsoft and National Geographic, and I’ve also owned and used GPS/Navigation hardware from Lowrance (iWay 500c) and TomTom (920T). The quality of even the 10K version of Garmin’s Topo maps completely blows all other software away. On the hardware side, the Lowrance was built better (solid as a tank and waterproof) and had a larger screen, but the quality of the maps and GPS circuitry, plus inability to easily enter Latitude/Longitude for waypoints, pushed me to look for a replacement. The TomTom, bought on friends recommendations and product reviews, is completely worthless for off-road driving. My only complaint with the Garmin hardware is that I wish the FM modulator was more powerful. The FM airways are packed in my area, and the few suitable frequencies are often used by people with Sirius satellite receivers that put out enough power to override my Nuvi’s transmitter from as much as 100 yards distance. It would also be very nice if the Nuvi 760 could handle more than 1,000 MP3 songs at a time.

All said, I've spent a couple grand on software and hardware and have done tons of research over the past 10 years and this is by far the best setup I can come up with. If someone knows of something better (that doesn't cost $2k+), I'd love to hear about it.

I hope this gives you enough information to make your decision.
Top

Okay, let me throw in my $.02 as well. Let me just start off by saying that I know very little of car based GPS devices. I've used one once, but it just didn't catch on with me. Having said that, I am very familiar with handheld GPS devices, especially those from Garmin.

I use a Garmin Colorado, which allows one to have a lot more flexibility than even the previous generation Garmin units. Right now, I have the entire City Navigator North America loaded, Topo USA 2008, National Parks West, a custom map for all roads in Australia & New Zealand, and a number of my own custom maps. Because of Mark's comments, I'm assuming/guessing that the car based GPS devices don't have very much memory onboard? In any case, let's talk about the topo options.

As to published Garmin software titles, the National Parks series has the best resolution (24k vs 100k) & definitely a lot more detail with POI's, etc. Oh, and MARKSPATH meant to say 100k resolution each time he said 10K-easy mistake. I always create my routes in Mapsource before any trip & just transfer them to the GPS. I sometimes use the City Navigator while driving on the freeway, but I usually just drive using one of the topo options because it shows so much more.

Anyway, if you are interested, you can download free maps for a number of US States & a few different foreign destinations as well. If you are really ambitious, you can do like I did and just create your own custom map(s). All of Garmin's products are created using USGS data which is freely available to all. There is obviously a bit of a learning curve involved, but it can be done. Let me show you a few examples:

Here's a shot of a section of Bryce Canyon with City Navigator 2008 NT: 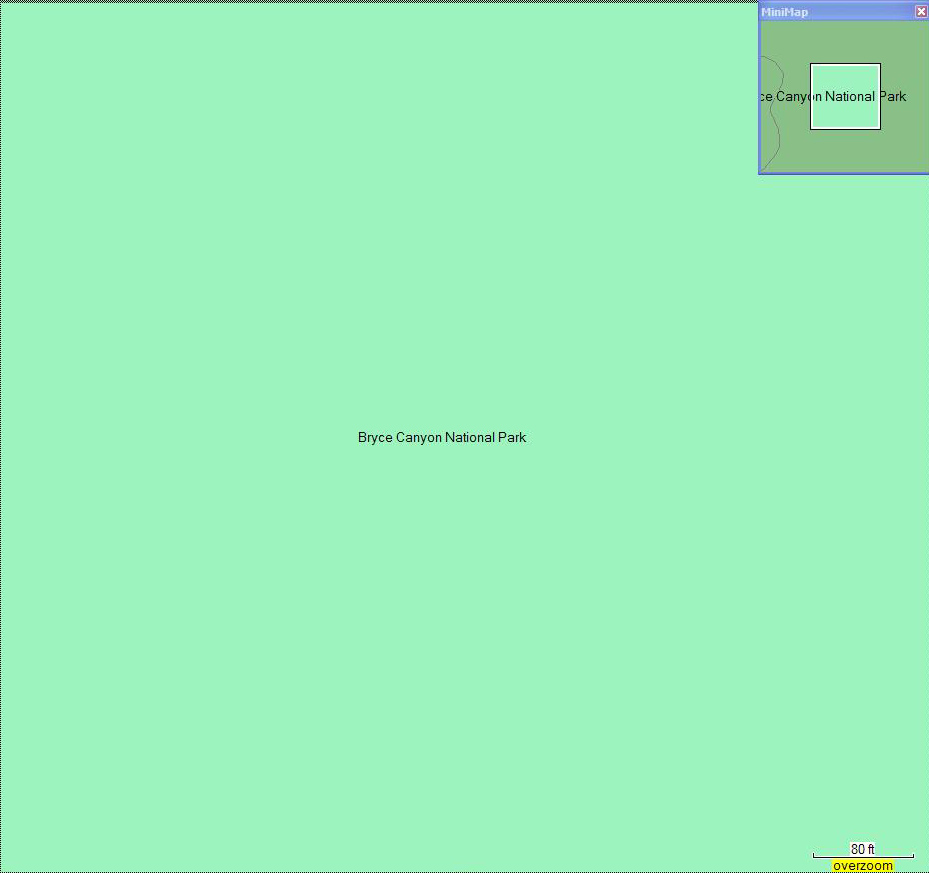 Obviously no detail whatsoever. Here's the same shot with Topo2008: 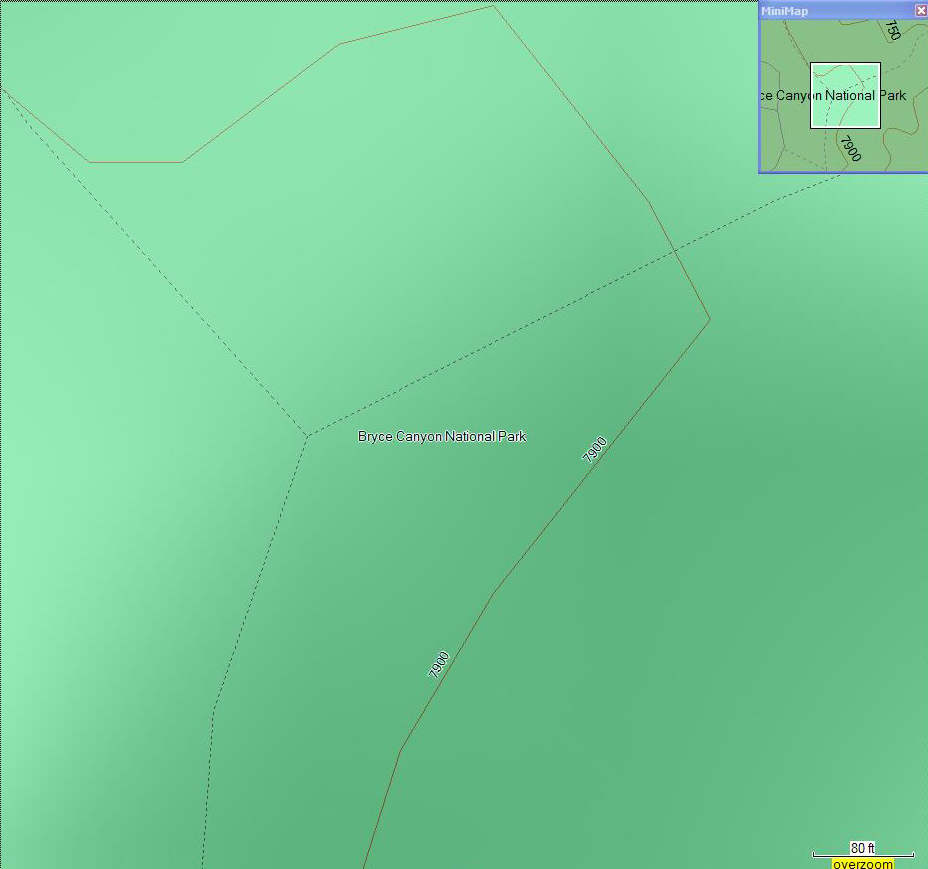 A bit better, as now there is info aside from just roads. Here's the same with National Parks West: 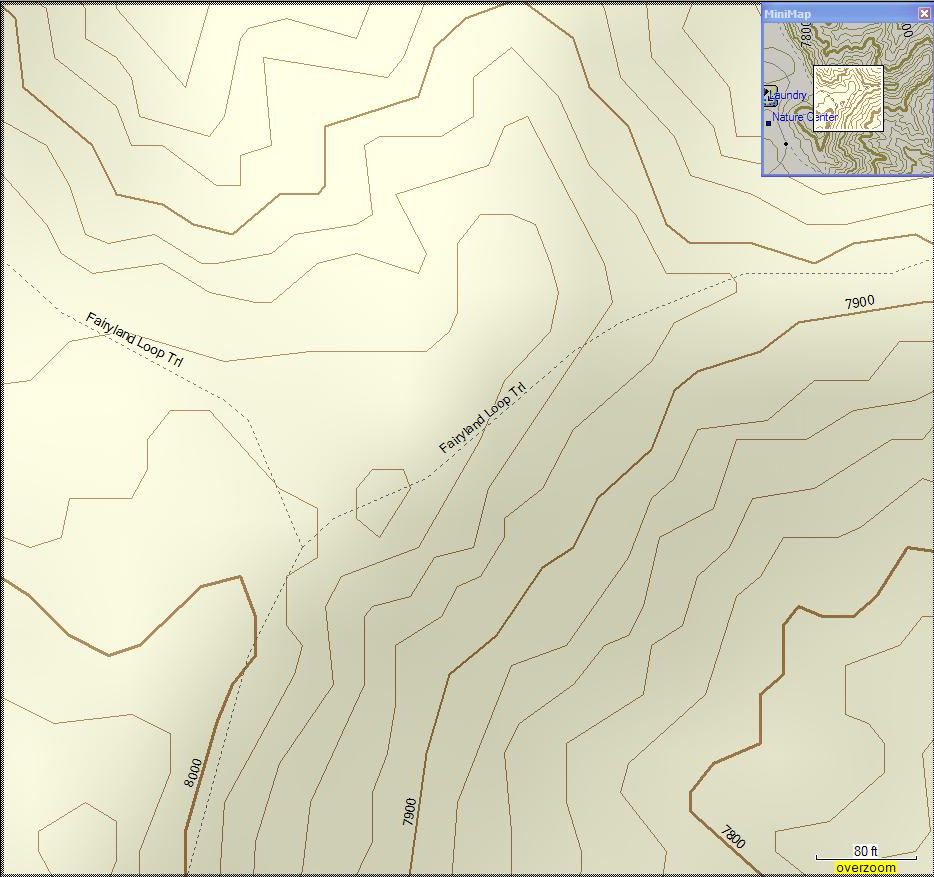 Huge difference. The more detail, the better. I only have one of my custom maps with me here at the office, but it lies outside the area that National Parks West covers, so I can only show a comparison between it and TopoUSA2008.

A shot with TopoUSA, which just makes it look like an easy walk through an intermittent streambed: 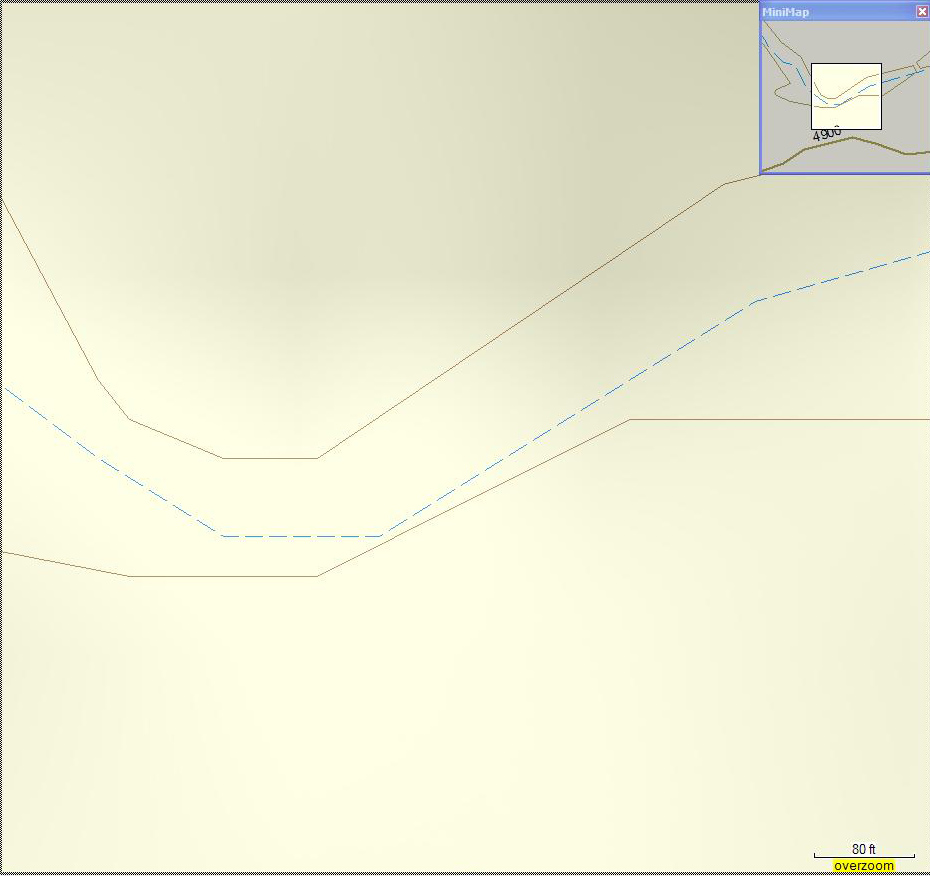 The same shot with my custom made map, which will show one that the stream crossing won't be easy at all: 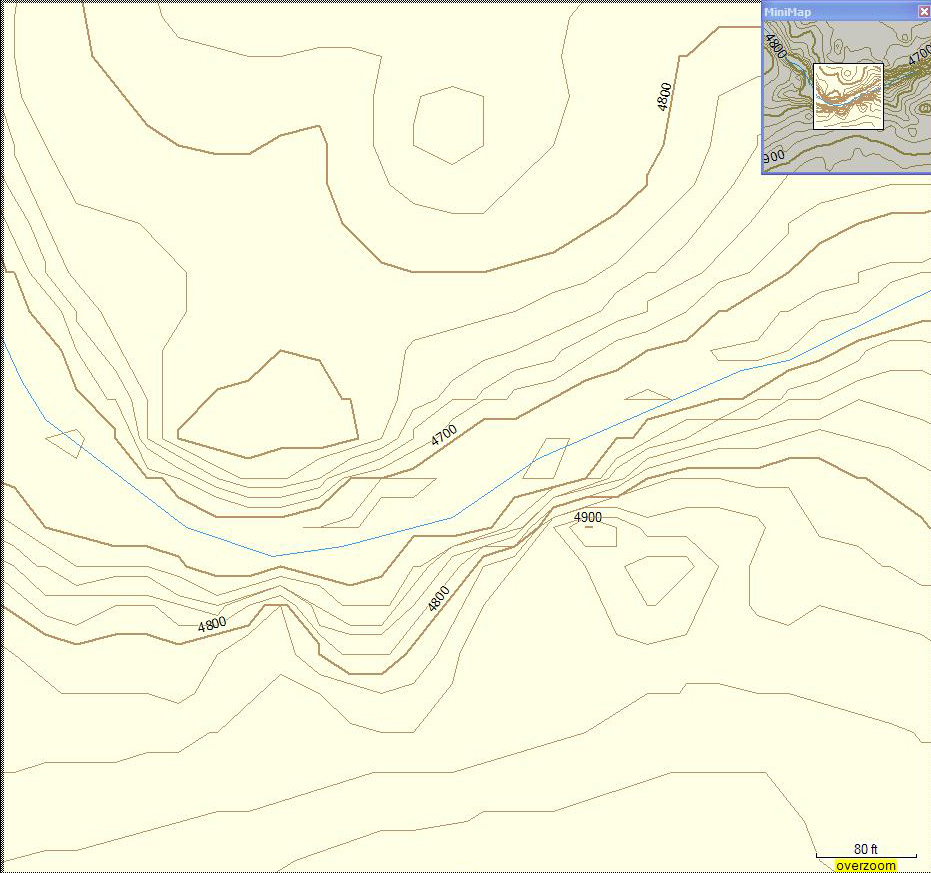 If you want a great resource for downloading custom maps from others, have a look HERE.

I don't have any links here that point to sites with custom mapping tutorials, but I do have link to a couple of custom maps.
Top
Post Reply
3 posts • Page 1 of 1