I just got the rocky road supersliders installed... took about 3 hours with a friend. We took our time to ensure everything was level as much as possible. My first concern is there is about 6" gap before the front and rear wheel. I am afraid that if I get over a rock that is a little narrow, I could get some damage to the rocker panels. For those that have them, do you have a 6" gap as well? Have you test them in the field? I think it's normal to have a little gap but this look like too much to me?

They were made to fit as close to the rocker panel as possible not to give away clearance as they bolt in both the body and the frame. If they were made 1/2" lower, they could have been longer.

What do you guys think? 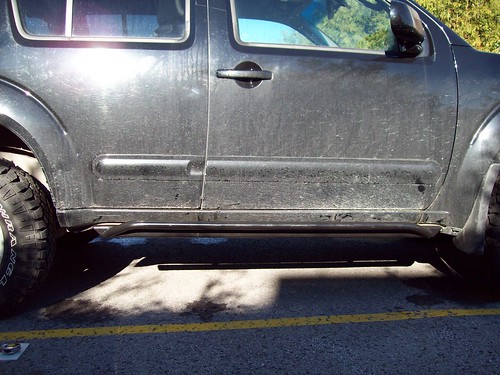 I don't think the gap will be a problem. I was thinking the same thing when I made mine. After mulling it over for a while I figured it would have to be a very tall, narrow rock and I probably wouldn't be driving over something like that anyway. I think I ended up with about 6 1/4 inches on mine. It fits the lines of the truck and allows better clearance.
Top

Thanks...I was a bit worry as those from Shrock seems to cover a bit more but this way we don't loose clearance and I don't plan on doing much rock crawling anyway. Just need to be careful like you said. You have a really nice set up by the way, I just looked at your pics.
Top

I don't intend to do any serious off-roading in my pathfinder, but... I would feel better if the slider extended longer as you're worried.

I did my offroading in my Xterra before the pathfinder... I had sliderz from 4Crawler.com. His sliders extended quite a bit...as you can see here.

That silver 1st gen Xterra was my friend's...

There were many times when I was glad to see the slider protected the entire (pretty much) rocker pannel.


The sliders you have look pretty nice... I'm sure you'd be okay as long as you're careful...and remain where you feel comfortable driving on...
Top

Matt06 wrote:Have you test them in the field? I think it's normal to have a little gap but this look like too much to me?

What do you guys think?

I've hit a rock/boulder twice now with mine. I grew up 4 wheeling (exploring is a better term) with my Dad, then later with friends. I follow the school of thought that if my slider, or any other part of the vehicle for the matter, hits & starts scraping against rock, then I need to turn the wheel away from that side and/or backup and take another approach. I have seen people hit something with their sliders on the Rubicon, yet couldn't get through any other way. That always resulted in damage because the slider only covers a small portion of the vehicle, which people tend to forget. So, a 6" gap really won't be making that much of a difference.
Top
Post Reply
5 posts • Page 1 of 1